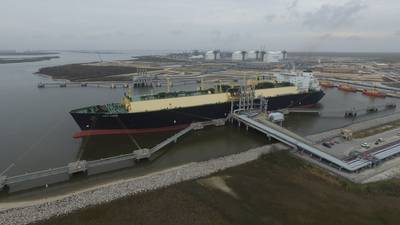 Prices for month-ahead Dutch gas have dropped by two-thirds since their peak last September of just under 30 euros per megawatt hour (MWh).

On Friday, Dutch gas for July delivery slumped to 8.95 euros per MWh, the lowest since August 2009.

The price falls are in part thanks to an influx of U.S. LNG supplies. But customers of Cheniere Energy, which dominates U.S. production, have been feeling the pain from their long-term commitments for months due to a fixed pricing formula.

Cheniere sells its LNG at 115% of U.S. gas futures plus a liquefaction fee of between $3.00 and $3.50 per million British thermal units (mmBtu), with a few buyers paying less.

At today's prices, Cheniere LNG costs around $5.61 per mmBtu with the liquefaction fee, compared to $3.19 per mmBtu paid for natural and regasified gas at the Dutch hub, a benchmark for European prices.

Yet U.S. LNG is still being sold to Europe, which received between 30% and 50% of all U.S. supplies between January and May this year, Refinitiv Eikon shipping data shows.

Traders say the liquefaction fee is a sunk cost for offtakers because it still needs to be paid even if they cancel purchases, a risk known years ago when sales and purchasing agreements were signed with Cheniere.

Royal Dutch Shell is the largest Cheniere offtaker with a commitment of 5.5 million tonnes per year (mtpa), paying $723 million annually in liquefaction fees, according to Cheniere's filings with U.S. regulators.

Shell, Naturgy and KOGAS declined to comment. GAIL did not respond to a request for comment. Other companies have signed up to Cheniere's fifth train at the Sabine Pass terminal as well as new plants at Corpus Christi, which are ramping up production.

Because of Cheniere's flexible destination clauses, buyers take the LNG and sell onwards to others or deliver it themselves to countries around the world.

Traders say for price dynamics to batter deliveries into Europe, the spread between 1.15 times Henry Hub prices and European benchmarks would have to be too low to cover the variable costs of shipping across the Atlantic and regasification at terminals.

That spread narrowed to below a dollar per mmBtu in mid-May for the first time since a brief dip beneath that level in 2017, Refinitiv data and Reuters calculations show.

It has since stayed there consistently, barely covering shipping costs at the start of June.

Regasification costs, not disclosed publicly, can reach 20 cents per mmBtu in Iberia and even higher at floating terminals, although companies that have booked long-term capacities are likely to pay lower rates.

It has helped that U.S. Henry Hub prices are also weak, slumping to a three-year low last week at $2.159 per mmBtu as clement weather and record-breaking shale production boosted inventories.

Benign Asian LNG demand, starting last winter, has been a major factor behind Europe taking so much LNG. As Asian LNG prices fell with demand, the arbitrage between the Atlantic and Pacific basins disappeared, compounding the impact on Europe.

In mid-July however, spot purchases of LNG will begin to focus on September deliveries, which is conventionally the beginning of rising Asian demand as Japan, South Korea and China start building stocks for winter.

European pipeline gas prices also tend to rise with the onset of winter.

Nevertheless, the seasonal pick-up may be weighed down by continuing bearish factors - rising supplies from new or expanded plants, stubbornly high gas stocks across the world and, in Asia, demand dented by economic headwinds.