The U.S. Navy needs more ships. And that means the Navy has to build more ships than it is decommissioning.

The sea service has a stated a goal of 355 ships, and as many as 500 and more when unmanned platforms are counted. There are 298 ships in the fleet today. For surface ships, this number includes a high-low mix of highly capable large surface combatants, and smaller ships such as littoral combat ships LCS).

The Navy’s smallest combatants are the 330-ton, 197-foot coastal patrol boats (PCs). Up until recently, ten of them have been serving in the Middle East with the U.S. Fifth Fleet performing maritime security, interdiction and escort duties. The Navy is in the process of decommissioning the PCs. The last five, based in Bahrain, are slated to leave the fleet soon. The U.S. Coast Guard’s Patrol Forces Southwest Asia also supports the Fifth Fleet with patrol vessels. Of the Coast Guard’s six 110-patrol boats (WPBs) based in Bahrain, five have now been removed from service, with one scheduled d to decommission soon. They are in the process of being replaced by six 154-foot Fast Response Cutters (FRCs). The PCs, WPBs and FRCs essentially perform the same mission. There are currently four FRCs in Bahrain, with two more to follow soon. Numerically, when the last PCs and WPBs are decommissioned and all six FRCs have arrived, the number of patrol assets will decrease from 16 to six.

The FRCs are being built in Lockport, La. The program of record is for 64 cutters, with 16 yet to be delivered. Although nominally the FRCs are replacements for the 110-foot WPBs, they have much better seakeeping abilities, and have shown they can conduct extended patrols.

The production lines for both the Freedom and Independence variants of LCS are drawing to a close. The last Freedom, USS Cleveland (LCS 31) is under construction at Fincantieri Marinette Marine (FMM) in Wisconsin, while the final Independence LCS, USS Pierre (LCS 38) is being built at Austal USA in Mobile, Ala. 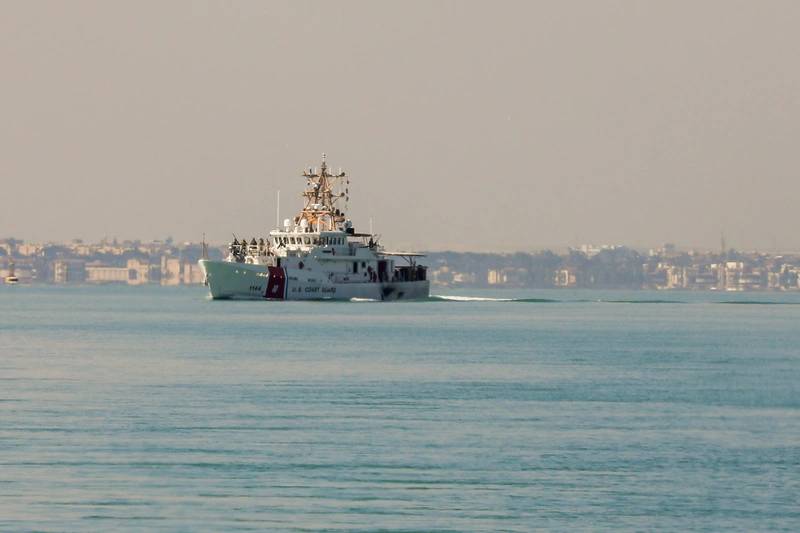 FMM is also building four multi-mission surface combatants for the Royal Saudi Navy, based on LCS. But as those move through the production line FMM is gearing up to produce the Constellation class of guided missile frigates (FFGs). The first FFG is scheduled to be delivered in 2026 and achieve initial operational capability (IOC) in 2029. However, every U.S. Navy shipbuilding program has experienced delays in the delivery and IOC of the first in class.

The frigate is based on a proven design—the French-Italian European multi-purpose frigate or FREMM. However, the U.S. design is wider, and has different systems, which adds technical risk, so some of the advantages of a proven design might be mitigated.

Austal is building the expeditionary fast transport (EPF) on a parallel production line to the LCS, which is also coming to the end of its program. Twelve are complete; three are under construction, and one more is on order. The Expeditionary Medical Ship (EMS), a variant of the EPF is also being built on the same production line. One EMS has been appropriated two more have authorized in House Armed Services Committee’s FY23 National Defense Authorization Act, although a contract has not been issued for EMS yet.

There is language in HASC’s FY23 NDAA that requires the Navy to produce a report on the ability to install a vertical launch system on the EPF platform, as a way to distribute lethality on more platforms.

Both the Austal LCS and EPF ships are all-aluminum, although Austal is building a steel production capability to build two towing, diving and rescue tugs (T-ATS) and a floating drydock for the Navy, and presumably other ships it may compete to build. The steel line was opened in April, and the yard will officially start cutting steel for the T-ATS program on 11 July.

The Navy can’t afford to modernize its aging Ticonderoga-class guided missile cruisers, and is modifying its large Zumwalt class of guided missile destroyers to be a platform for hypersonic strike missiles. The Zumwalt class was originally planned for 32 ships. Only three were built. None have deployed. A new large surface combatant (LSC), now called DDGX, is still an idea on the drawing boards. It will be the replacement for the Ticonderoga class, but its years away from reality. It’s doubtful that any of those cruisers will last long enough to hand off the baton.

Although the Navy planned to shut down production of the Arleigh Burke destroyers, which began with DDG 51, commissioned in 1991, the service saw the wisdom of reopening the line at Bath Iron Works in Maine, and Ingalls Shipbuilding in Pascagoula, Miss. Today those yards are building the Flight III variant of Arleigh Burke DDGs, which will help ease the gap between the CG 47s and DDGX. 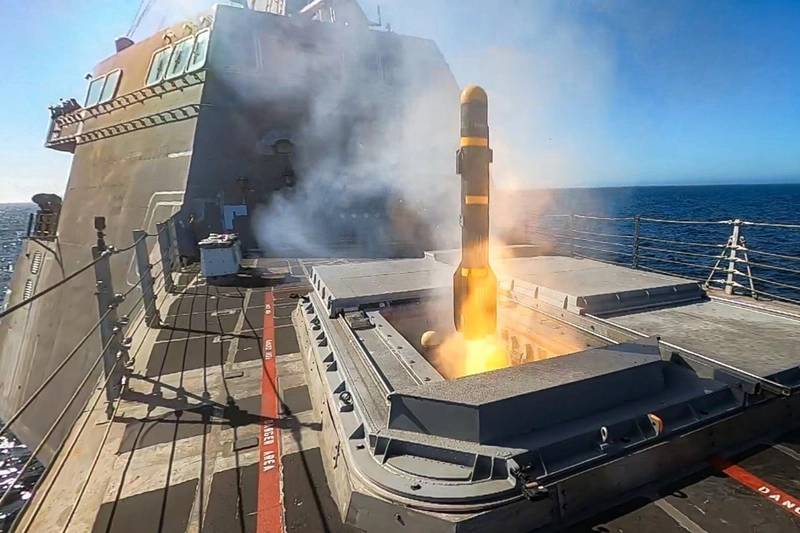 USS Michael Murphy (DDG 112), commissioned in 2012, was to be the last Arleigh Burke built. In 2009, with the decision to stop production of the DDG 1000s at three ships, the Navy ordered more DDG 51 Flight IIA ships, essentially restarting the production line. DDG-113 to DDG-115 were mostly similar to previous Flight IIAs, but DDGs 116-121 had some of the new technology that would be found on the Flight IIIs. The first Flight III, USS Jack Lucas (DDG 125), has been launched and should commission in 2023. Another 14 Flight IIIs have been approved.

A total of 35 littoral combat ships are planned, including 16 Freedom-class ships and 19 Independence-class ships. The Freedom has a monohull design, while the Independence is a trimaran. LCS was designed to manned with a very small crew—30 people--which in practice proved to be too small. The original program was for 52 ships, but was reduced because of cost overruns, delays, and issues with lethality, survivability and issues with the crew size. Despite their relatively young age, the Navy is even planning to remove some of the Freedom class LCS because of propulsion problems.

LCS was supposed to be a simple ship that would have its combat capability installed in reconfigurable modularized mission packages. That has proven to be harder than anticipated. The mine countermeasures mission package is not yet fully certified, and Chief of Naval Operations Adm. Mike Gilday recently cancelled the ASW mission package because it doesn’t work. The only ships that have deployed have carried some form of the surface warfare mission package, which originally was just a few 11-meter RHIBs, although they did carry an aviation detachment. The LCS lethality is being enhanced with Hellfire Long Bow Missiles and the Naval Strike Missile (NSM), which gives the ship a potent anti-ship capability.

Speaking at the WEST 2022 conference, co-hosted by AFCEA and the U.S. Naval Institute, Gilday said “…we need a naval force of over 500 ships.”

In that number, Gilday mentioned possibly 30 or more smaller amphibious ships to support the new Marine Littoral Regiments, and “…probably looking into the future about 150 unmanned.”

The “smaller amphibious ships” refers to a new class of light amphibious warship (LAWS) to support distributed maritime operations (DMO) and smaller Marine combat units. Presumably, these LAWS would have volume and the ability to load and unload vehicles and equipment, and shallow draft to get close to the beach. If the mission packages are removed from the LCS mission bay, there is ample room. And the EPF is basically a car ferry. It has a stern ramp to facilitate moving vehicles on and off the ship. So LCS and EPF can help deliver that light amphibious lift. 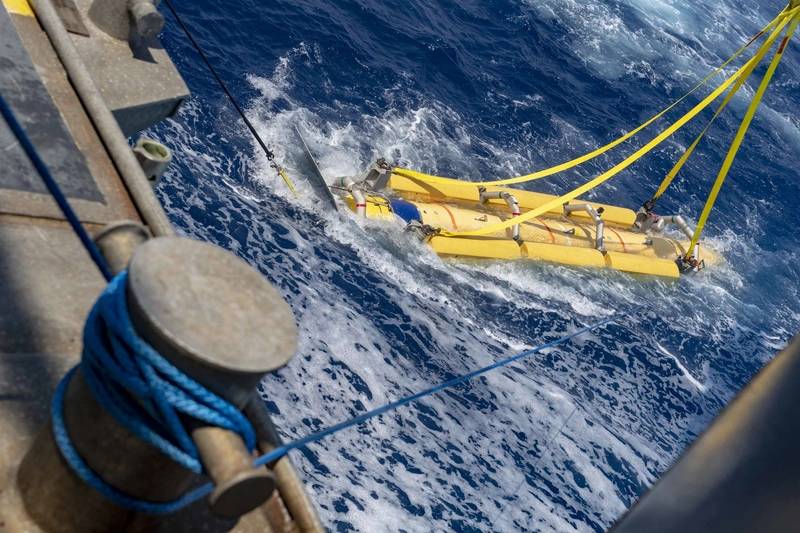 The Military Sealift Command expeditionary fast transport (EPF) has demonstrated an ability to launch and recover mine countermeasure systems (MCM) as a vessel of opportunity. Here, a Knifefish unmanned undersea vehicle (UUV) training model undergoes crane operations aboard the USNS Spearhead (T-EPF 1). Knifefish is a medium-class mine countermeasure UUV designed for deployment off the littoral combat ship. (U.S. Navy photo by Mass Communication Specialist 2nd Class Anderson W. Branch/Released)
Unmanned flotillas
In looking at force structure, the Navy is dedicated to bringing unmanned systems into the fleet in large numbers. The first ORCA large displacement underwater vehicle (LDUUV) has been delivered, which can serve as a platform to covertly insert other underwater vehicles.

And in the Middle East, the U.S. Fifth Fleet is envisioning a large fleet of unmanned surface vehicles (USVs) to create persistent maritime domain awareness.

Last year Fifth Fleet establish Task Force 59 as an unmanned systems and artificial intelligence task force. “We are on a path to build the world’s first international unmanned surface vessel fleet. We have two different types of platforms. One of them provides a persistent ISR capability, and the other has a high-speed sprint capability. In the case of the persistent ISR, we have several unmanned vessels underway in regional waters that have been out there for 140 days, which is incredible. The goal is to work with our partners and grow the USV capability by the summer of 2023 to a point where we have 100 USVs operating around the theater. Our partners see the opportunity here and they are very committed to moving forward,” Cooper said.

One can imagine the need for ships with sufficient volume and handling capacity to help position, launch and recover these unmanned systems where needed.

The LCS concept had always relied on using speed to deliver offboard mission systems and withdraw to a safer area and let the systems do their job. That capability would be idea in serving as a tender for large numbers of offboard and unmanned vehicles or other remote sensors. And with the surface mission package, the ship makes a formidable light combatant that can contribute to force structure and presence. Both ships fill an important mission and, now that the bugs are worked out, are capable combatants.

It makes sense to deliver addition FRCs to either the Coast Guard to operate in support of its national defense mission, or to the Navy to operate in Fifth Fleet.

Furthermore, continuing to produce the Independence class LCS and the EPF would enable the delivery and support of what will become a very large network of unmanned systems and offboard sensors.

These ships are proven. Making such a decision now, while the production lines are hot, will deliver more proven capability to the fleet sooner.