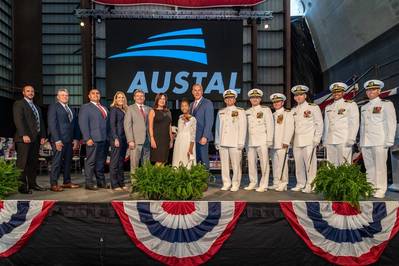 Zinke, wife of former U.S. Congressman and former U.S. Interior Secretary Ryan Zinke, was selected by then-Secretary of the Navy Richard Spencer to be the ship sponsor of the future USS Santa Barbara (LCS 32). Zinke was born and raised in Santa Barbara.

The LCS class consists of two variants, the Freedom and the Independence, designed and built by two industry teams. The Freedom-variant team is led by Lockheed Martin in Marinette, Wis. (for the odd-numbered hulls). The Independence-variant team is led by Austal USA (for LCS 6 and the subsequent even-numbered hulls). LCS 32 is the 16th Freedom-variant LCS and 32nd in the LCS class.

The Independence-variant LCS program has recorded a number of deployments with more ships scheduled to deploy in the near future. In May 2020, the USS Montgomery (LCS 8) conducted operations in the South China Sea. Later that same month, the USS Gabrielle Giffords (LCS 10) also conducted presence operations in the area. In December, Giffords moved to support U.S. Southern Command in the Caribbean and eastern Pacific Ocean with the ship interdicting $100 million of illegal drugs. In June, the USS Tulsa (LCS 16) conducted operations in the Philippine Sea, while the USS Charleston (LCS 18) operated with the Sri Lankan navy in Malaysia. There are currently three Independence-variant LCS deployed to the U.S. Indo-Pacific Command region.