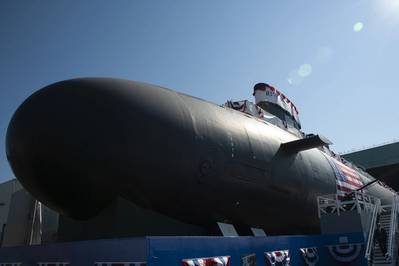 “This submarine is a fitting tribute to Admiral Rickover, who truly transformed our Navy,” said Adm. James Caldwell, director, Naval Nuclear Propulsion Program, during his remarks at the celebration.

Caldwell credited Rickover – who served for 63 years in the Navy and is credited with spurring the service to adopt nuclear propulsion after World War II – with not only technological advances but cultural ones. He lauded Rickover’s legendary work ethic, frankness, attention to detail and commitment to excellence, which he said has since permeated throughout the Navy.

The Honorable James F. Geurts, performing the duties of Under Secretary of the Navy, told those in attendance that the construction of the future USS Hyman G. Rickover is a testament to the dedication of America’s shipbuilders and sailors.

“We did not close a shipyard, public or private, for one day during the pandemic,” Geurts said. “The sustained commitment to excellence displayed by this workforce shows in the construction of this boat and adheres to the culture of excellence promoted by Hyman G. Rickover.

Darleen Greenert, the submarine’s sponsor, a Navy veteran, and wife of former Chief of Naval Operations Jonathan Greenert, highlighted the sacrifice of military families during her remarks, and remembered the late Eleonore Rickover, the namesake admiral’s wife.

“She set the bar [for ship sponsors],” Darleen Greenert said of Eleonore Rickover, who was the sponsor for a previous Los Angeles-class submarine to bear the Hyman G. Rickover name, SSN 709. “She loved her crew.”

The first Hyman G. Rickover was commissioned at Submarine Base, New London, in Groton, on July 21, 1984. SSN 709 and its crew deployed 12 times until its decommissioning in December 2007. Over the years, its decorations included the Atlantic Fleet Golden Anchor Award, Submarine Squadron Eight’s anti-submarine warfare white “A” and engineering red “E” awards and the prestigious Sixth Fleet “Hook ‘Em” award for anti-submarine warfare excellence.

Greenert asked family members of the crew of the future USS Hyman G. Rickover to stand together when her daughter, Matron of Honor Sarah Greenert McNichol, broke the ceremonial bottle of sparkling wine across the bow.

Rickover will eventually joint the fleet with a displacement of 7,835 tons, crew of 132, and a weapons payload of 12 vertical launch systems and four torpedo tubes.

Aerospace, defense and security company Babcock said it has secured the first export contract for its Arrowhead 140 (AH140)…