U.S. Navy: Constellation-class Brings Frigates Back to the U.S. Fleet

Introducing a new class of warship can be fraught with pain, and the first ship is always the hardest – almost always behind schedule and over budget. And trying something new and transformational is even harder.

The U.S. Navy knows this from experience. That’s one reason why the Navy is opting for a lower risk design for its next class of guided missile frigates (FFGs).

Just about every new class has experienced a rough start. Although the USS Arleigh Burke-class of guided missile destroyers (DDGs) today represent the largest and most successful class of warships, with 68 active ships in the fleet and ships still being built at two shipyards, the lead ship was over budget and behind schedule.

To manage risk, the Navy has often taken measured steps in introducing transformational technology in new classes of ships. The Spruance class of destroyers had a legacy combat system, but a new hull and gas turbine propulsion plant. The Ticonderoga class guided missile cruisers (CGs) had a transformational Aegis combat system, but were built upon the Spruance hull. The Arleigh Burkes had a new and stealthier hull design, but with essentially the same gas turbine propulsion plant and Aegis combat system.

Class half empty
Although there are no frigates in the fleet today, they have served in large numbers in the past, and many other navies have them During World War II, the U.S. called them destroyer escorts (DEs) (which in 1975 were reclassified as frigates—slower and less lethal than destroyers, but constructed in large numbers. The were designed to escort relatively slow convoys.

An October 2021 report by the Congressional Research Service explained that “frigates are generally intended to operate more in lower-threat areas. U.S. Navy frigates perform many of the same peacetime and wartime missions as U.S. Navy cruisers and destroyers, but since frigates are intended to do so in lower-threat areas, they are equipped with fewer weapons, less-capable radars and other systems, and less engineering redundancy and survivability than cruisers and destroyers.”

As an example, the Charles. F. Adamas class of guided missile destroyers and the Knox class of frigates were contemporaries of sorts, and about the same size and displacement, but the Adams class had two guns, four boilers and two screws, while the Knox class had one gun, two boilers and one screw. That may be an overly simplified comparison, but it serves to make the point.

The Navy introduced new capabilities with successive classes of DEs and FFs. Each new class brought something new to the fleet, but they were not totally transformational. This approach was taken with the introduction of the Garcia, Brooke, Knox and Oliver Hazard Perry classes of FFs and FFGs. 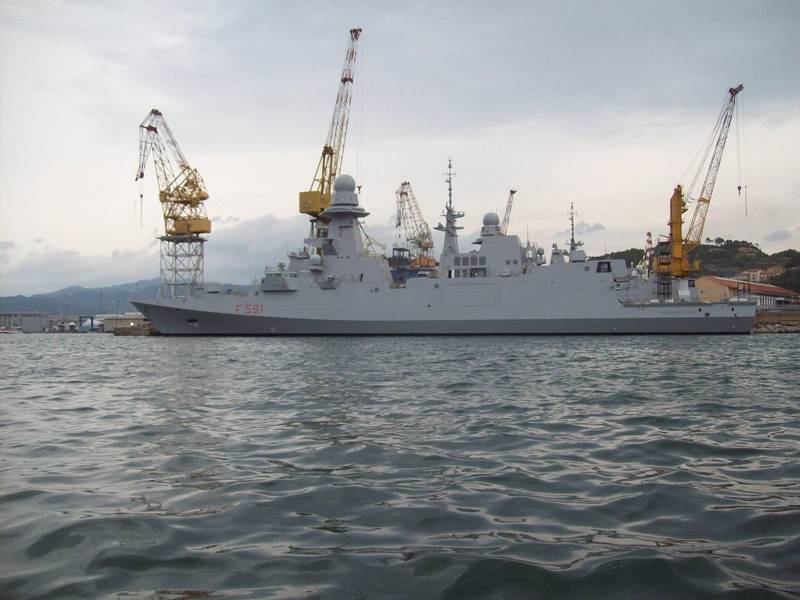 The same cannot be said for the littoral combat ship (LCS) and Zumwalt class of DDGs, which are technologically and conceptually different in just about every way. With LCS, the Navy selected not one but two totally different designs, with different hull, mechanical, electrical and combat systems. While it’s important to embrace the most modern technology to stay ahead of potential adversaries, it can lead to significant delays and costs in trying to introduce too much too fast. Placing new systems on top of the legacy fleet infrastructure complicates logistics, training and sustainment. For battle group commanders, frigates might have been less capable, but not less valuable, because they could do missions that were more appropriate for a smaller ship, and call at ports that larger ships couldn’t enter.

Now the frigates are coming back. The Navy has embarked on a new program to build the Constellation (FFG 62) class of guided missile frigates. To reduce risk to budget and schedule, it will be built on an existing hull design and armed with tried-and-true combat systems and weapons. The current program of record is for 20 ships, although it could be more. The current contractor, Fincantieri Marinette Marine (FMM) of Marinette, Wis., has been awarded a detail design and construction (DD&C) for up to 10 ships in the program—the lead ship plus nine option ships, although a contract could be awarded to a second yard to get more ships into the fleet sooner.

FMM’s yard is currently optimized to build LCS, which it does for prime contractor Lockheed Martin. It will build four additional multi-mission surface combatant hulls of a similar design for the Royal Saudi Navy, and possibly one for the Hellenic Navy. But it has now turned its attention to reconfiguring the production facilities to build the larger FFGs.

FMM is making capital investments to its infrastructure, including a new or upgraded automated panel line; preparation and blast paint facility; construction facility for modules and grand modules; and a final hull erection and outfitting facility. The yard at Marinette has traditional launch ships sideways into the Menominee River, but is procuring a new shiplift. Ships at land level are moved onto the shiplift, which then submerges so the ships can float free.

FMM’s Bay Shipyard at Sturgeon Bay is also getting a steel processing and fabrication facility to be able to work on naval vessels, and will perform FGG 62 work in a new module/super construction and hull erection facility.

Just about all of the hardware and software is proven technology, so risk should be reduced. Unlike the two variants of LCS, which had new propulsion systems, the frigate will be based on a proven design, albeit modified for more American content. However, Congress has directed the Navy to make sure it works by establishing a land-based test site and validate the design.

Parental guidance advised
To reduce risk, the FFG 62 is based upon a “parent design,” the Italian-French FREMM (Fregata Europea Multi-Missione) frigate, a ship that is being been built in in France and Italy for their respective navies and a few foreign customers. FMM’s parent company, Fincantieri builds the ships at their Muggiano shipyard at La Spezia, Italy.

Although the parent design is European, FFG 62 will have significant American content, to include a government furnished combat system centered around the new SPY 6 radar and newest baseline of the Aegis Combat System and other U.S. sensors and systems.

The U.S. frigate will be about 23 feet longer and about 500 tons heavier than their European cousins to provide margin for growth and to accommodate future weapons such as lasers, although the bridge and propulsion plant layout is the same. It will be equipped with a 32-cell, strike-length MK 41 vertical launch system (VLS) launcher and armed with Standard Missiles, Naval Strike Missile capable and Evolved SeaSparrow Missile (ESSM) Block II; a Mk110 57mm main gun, and have the RAM close-in system for point defense. It will have a flight deck and hangar for MH-60R helicopters. It will have essentially the same anti-air and anti-submarine warfare capability as the newest Flight III DDGs.
Speaking at the Surface Navy Association’s annual symposium earlier this year, FFG program manager Capt Kevin Smith said, “We have ample margin for this hull form. We also have in our requirement space, weight, power and cooling margin to accommodate upgrades down the road over the service life of the ship. Some of those could lead to direct energy type projects and other capability.”

The Navy’s current force plan calls for 52 small combatants, made up of the 32 littoral combat ships and 20 of the new FFGs.
The Navy estimates the cost per ship at about $870 million. The Congressional Budget Office said that estimate may be low. “Compared with the design on which it is based, the FFG(X) will be more densely built and will have somewhat more complex weapon systems.”

The lead ship is planned for delivery to the Navy in around 2026. The first 12 FFGs will be assigned to Everett, Wash., along with the training and support infrastructure concentrated there. Eventually the FFGs will have Blue and Gold Crews, with 24 crews based at Everett, but the lead ship will be initially manned with a single crew.

The Italian FREMMs are classified as either general purpose or ASW. There are differences in weapons and sensors. The GP variant has a bigger gun, while the ASW variant has a towed acoustic array, for example.

The Navy sees the new FFG as a flexible platform for independent operations, convoy escort or strike group integration.

Risk reduction
After fits and starts with truly transformational warships—namely the Ford-class aircraft carrier, Zumwalt-class guided missile destroyers and the Freedom and Independence classes of littoral combat ships—the U.S. Navy’s next class of surface combatant will hopefully have less risk.

At the same time, the Navy is completing its buy of LCS, and the Flight IIA DDG 51 Arleigh Burke-class of guided missile destroyers. The next generation of DDG 51s--the more advanced Flight IIIs--have begun production, and will serve as a bridge between the retirement of the CG 47 Ticonderoga class of guided missile cruisers and the arrival of the yet-to-be fully defined but probably pretty transformational large surface combatant. The Navy simply can’t afford to have a program beset by delays while things settle down and it figures out the technology out, so its counting on a smooth introduction of the frigate into the fleet. 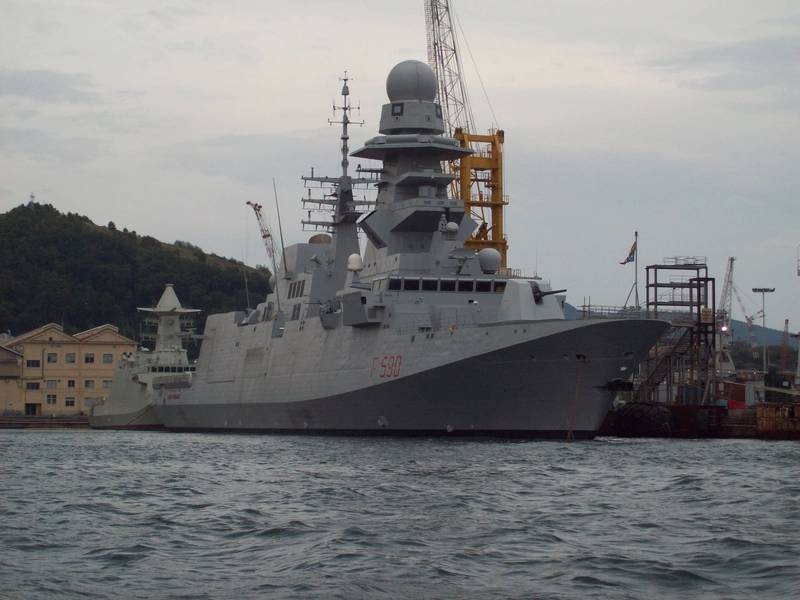 ITS Carabinieri (F 590) while under construction at Fincantieri’s shipyard in L Spezia, Italy. (Photo by Edward Lundquist)