US Navy Pays Contractors $600 Mln That Had Been Withheld 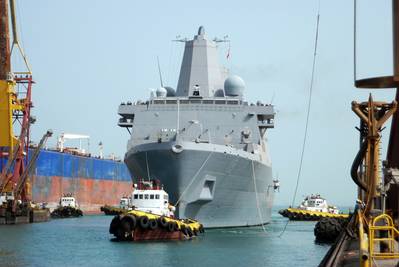 The U.S. Navy has paid defense contractors $600 million it had withheld due to poor workmanship, hoping the funds would shore up finances for suppliers ravaged by the coronavirus-driven economic downturn, a Navy official said on Tuesday.

The move, which follows a similar action taken by the Air Force that released billions of dollars in payments, is aimed at replacing revenue vital Pentagon suppliers have lost in their non-military businesses as the spreading coronavirus has halted business activity nationwide.

"We were immediately able to infuse about $600 million of funds that we had on withholds," James Geurts, the assistant secretary of the Navy for research, development and acquisition, told reporters on a conference call.

A Navy spokesperson said "for example, with the ship repair industry, withholds were reduced to one percent."

The Department of Defense has also accelerated contract awards as it leverages its portion of the more than $700 billion annual defense budget to help keep suppliers afloat.

Geurts wrote a memo on March 24 to his staff directing them to release or reduce the withholds. It did not discuss rectifying the root causes.

"This current emergency shouldn't be an excuse to avoid accountability for poor performance that predated this outbreak," said Mandy Smithberger, of the Project On Government Oversight in Washington.

Earlier this month, Geurts said he had authorized "hundreds of millions" of dollars through top suppliers like General Dynamics and Huntington Ingalls Industries, but it was unclear if he meant money withheld for contract disputes or sped up contract payments.

A Huntington Ingalls spokesperson said the company had no withholds.

While the Navy did not name any companies that received payments, industry sources have said the biggest contractors have been filtering coronavirus-related funds to their suppliers and subcontractors who, because of their smaller size, are on much shakier financial footing.

The Navy's multi-layered supply chain is comprised of companies building out President Donald Trump's vision for a 350 ship Navy. The funding will help pay salaries and ensure hard-to-replace workers are not lost to other industries or early retirement.

Geurts has said the Navy is pushing money into the defense industrial base by speeding up contract payments, hastening contract awards and releasing funds withheld for poor past performance.

The U.S. Air Force said it would release $882 million in payments to Boeing that were held back due to flaws in the KC-46 air refueling tanker.