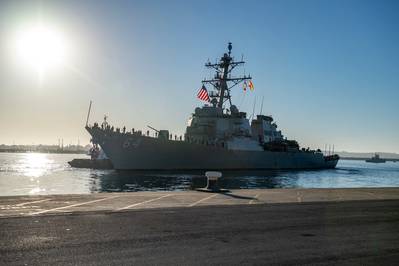 The U.S. Navy on Thursday announced it has relieved the commanding officers of two of its U.S. East Coast warships, USS Carney (DDG 64) and USS Mesa Verde (LPD 19).

In separate statements, the Navy said it relieved Cmdr. Alexa Jenkins and Capt. Michael D. Nordeen, citing loss of confidence in their ability to command.

Jenkins will be temporarily reassigned to the staff of Commander, Naval Surface Squadron 14, and Capt. Aaron Anderson will be assigned as Carney's commanding officer until a permanent relief is identified.

Nordeen will be temporarily reassigned to Commander, Naval Force Atlantic, in Norfolk, Va., and Capt. Gregory Baker, ESG-2 Chief of Staff, will be assigned as Mesa Verde's commanding officer until a permanent relief is identified.

Neither relief will impact to the command’s mission or schedule, the Navy said.

The 13th Arleigh Burke-class guided-missile destroyer, Carney is homeported in Mayport, Fla. and named after Adm. Robert Bostwick Carney. The ship shifted homeport to Mayport in July of 2020 after completing a five-year Forward Deployed Naval Forces-Europe deployment to Rota, Spain, as part of Destroyer Squadron 60.