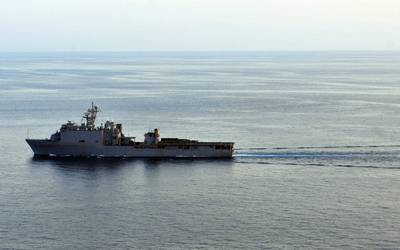 The U.S. Navy on Wednesday said it was establishing a new multinational task force that would target arms smuggling in the waters around Yemen, the latest American military response to Houthi attacks on Saudi Arabia and the United Arab Emirates.

Washington has sought to reassure Saudi Arabia and the UAE, who see the U.S. commitment to the region as waning, by providing additional military support in recent months following the missile and drone attacks on the Gulf nations.

Fifth Fleet Commander Vice Admiral Brad Cooper said that the task force would, from Sunday, ensure a force presence and deterrent posture in the Red Sea, Bab al-Mandab and Gulf of Aden.

"These are strategically important waters that warrant our attention," Cooper said on a call with reporters, adding that the trafficking of people and drugs would also be targeted.

The waters around Yemen are a key passageway for global trade, including oil supplies, and vessels have in the past been targeted by the Houthis, as well as other forces.

Asked about the air raids from Yemen on U.S. partners Saudi Arabia and the UAE, Cooper said the task force would impact the Houthi's ability to obtain the weaponry needed for such attacks.

"We'll be able to do it more vibrantly and more directly than we do today," Cooper added.

A U.S. official told Reuters that the waters between Somalia, Djibouti and Yemen were well-known "smuggling paths" for weapons destined for the Houthis.

"The new international task force will certainly go after this issue," the official said, speaking on condition of anonymity.

Iran has long been accused of smuggling weapons to the Houthis, a charge it denies.

The new naval task force would consist of between two and eight vessels and is part of the 34-nation Combined Maritime Forces, which Cooper also commands, that has three other task forces in nearby waters targeting smuggling and piracy.

The United States has provided Saudi Arabia and the UAE this year with additional air defence support following the Houthi attacks.

But diplomatic sources have said that the Gulf states remain convinced that the U.S. commitment to the region is weakening.

The launch of the task force comes amid a two-month truce in the nearly seven-year Yemen war that has killed tens of thousands of people and displaced millions more.

(Reuters - Reporting by Alexander Cornwell; Editing by Will Dunham and Mark Porter)