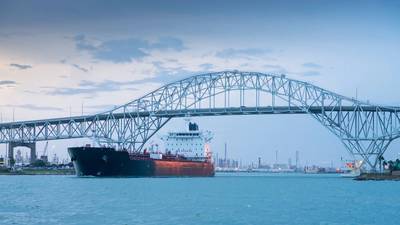 U.S. crude shippers are exporting huge amounts of oil to meet strong demand from Europe following Russia's invasion of Ukraine and subsequent sanctions against Moscow. In coming years U.S. oil may find even more buyers overseas, but that could test the capabilities of U.S. export infrastructure.

How much crude does the United States typically export?
U.S. crude exports averaged 3.7 million barrels per day (bpd) over the four weeks through late May, their highest since March 2020, according to the U.S. Energy Information Administration. More recently, exports are averaging 3.1 million bpd, making the United States one of the biggest crude exporters worldwide.

Where does the United States export oil from?
The United States mostly exports from the Gulf Coast from ports including Houston, Corpus Christi and Beaumont, all in Texas. Corpus Christi is the largest, exporting about 2 million bpd of oil, followed by Houston at around 700,000 bpd, said Matt Smith, lead oil analyst for the Americas at Kpler. 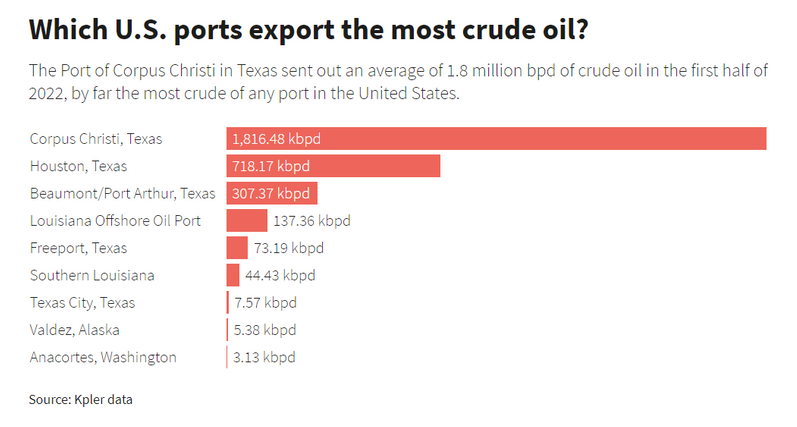 The Port of Corpus Christi in Texas sent out an average of 1.8 million bpd of crude oil in the first half of 2022, by far the most crude of any port in the United States.

How much could the United States potentially export?
Analysts say the U.S. Gulf could export roughly 5 million bpd; any more than that would cause substantial congestion in shipping channels, Smith said. However, that would also require an increase in U.S. production.

The weekly record for U.S. crude exports was nearly 4.5 million bpd in December 2019. The world's top producer is pumping about 12 million bpd, and uses most of that oil domestically.

U.S. ports have been expanding in recent years, including major dredging projects to handle larger tankers that can carry more oil, and some, like Corpus Christi, could potentially handle more exports.

The Port of Corpus Christi is undergoing an improvement project that, once completed next year, would expand the ship channel to increase U.S. exports. It will, however, still require ship-to-ship transfers as the ship channel is not deep enough to fully load the Very Large Crude Carriers (VLCCs), which hold about 2 million barrels, favored in other major ports.

Where does U.S. oil go?
The United States sends the majority of its crude - about 1.4 million bpd - to Europe, around 1 million bpd to Asia, 250,000 bpd to Canada, and other barrels to Latin America, Kpler's Smith said.

U.S. export demand is heavily determined by the price of U.S. crude relative to Brent crude, the global benchmark. Currently U.S. crude is trading at a discount of around $6.80 to Brent, making U.S. grades attractive to buyers in other countries.

Why is the U.S. exporting oil when local fuel prices are high?
Not all U.S.-produced oil is optimal for domestic refineries. The United States produces a lot of "sweet" crude, which is lower in sulfur content, and its refineries are generally geared toward processing more "sour," heavier crude, Smith said.

That means more domestic barrels will be sent abroad to refiners that can process them, while U.S. refiners import barrels best suited to their use.

The United States has long been a crude importer, though net imports are steadily declining; the nation imported, on net, about 3.1 million bpd in 2021, more than halved from 6.8 million bpd in 2017, according to the EIA. 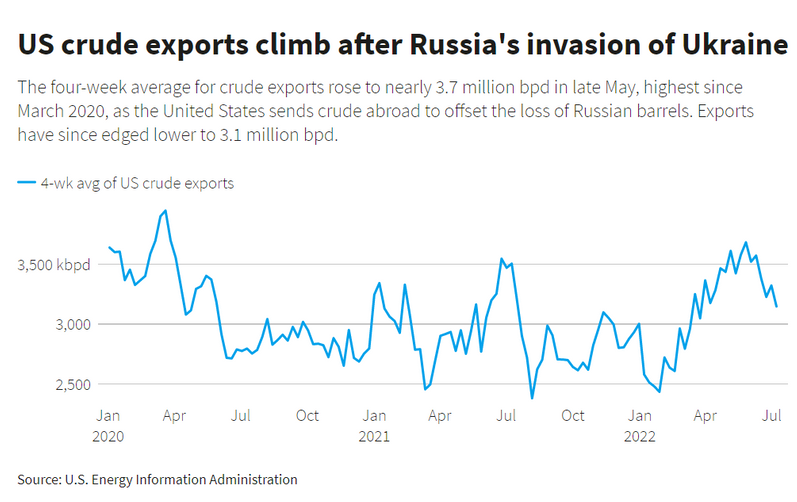 The four-week average for crude exports rose to nearly 3.7 million bpd in late May, highest since March 2020, as the United States sends crude abroad to offset the loss of Russian barrels. Exports have since edged lower to 3.1 million bpd.