U.S. Ports Have Highest Demurrage and Detention Charges in the World, Report Shows 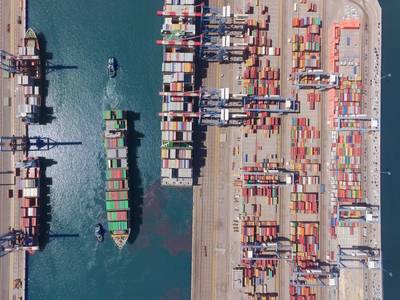 Container xChange, an online platform for container trading and leasing, says its report indicates that the (D&D) charges imposed on the US shippers by container lines continue to be the most expensive in the world and have increased this year (2022) even as global average fees have fallen from the record highs of 2021. What is more,  U.S. ports occupy the top five spots in the list of "60 ports ranked by highest to lowest D&D charges across shipping lines."

According to the report, despite increased U.S. regulatory scrutiny of D&D charges, shippers using the port of New York now face the highest D&D fees on the planet. New York is followed by the ports of Long Beach, Los Angeles, Oakland and Savannah in the rank list. All five ports were more than 2-3 times more expensive than Hong Kong in 7th spot, and at least 20 times more expensive than leading Asian container hubs such as Dalian in China and Busan in Korea.

The report further notes that global average D&D charges levied by container lines on customers two weeks after the cargo was discharged from the vessel increased by 38% for standard-sized containers from $586 in 2020 to $868 in 2021.

"U.S. retailers, manufacturers, agricultural shippers, and other exporters and importers are laboring under some of the highest shipping levies in the world, according to Container xChange. 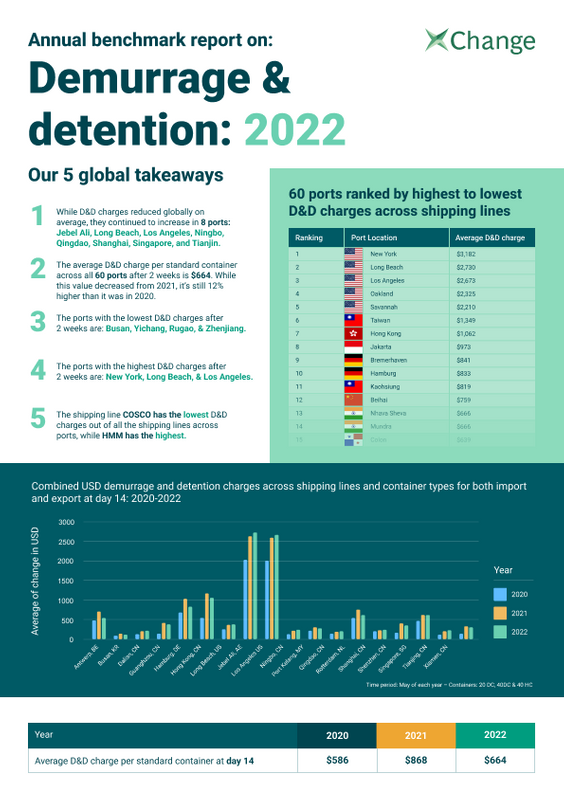 "Under heavy pressure from shipper lobbyists suffering from soaring shipping rates, schedule disruptions, and higher fees, all of which have been adding to supply chain cost inflation, President Biden signed the Ocean Shipping Reform Act (OSRA) into law on June 16, 2022.

OSRA arms the Federal Maritime Commission, the U.S. shipping regulator, with the power to act more assertively on D&D charges and shifts the burden of proof for the reasonableness of fees to ocean carriers instead of shippers," Container xChange said.

“We have received hundreds of complaints from shippers,” said Rep. John Garamendi, a Democrat from California who sponsored the initial House version of the bill.

So far in 2022, average D&D charges by major ports have declined to an average of $664 per container by 26%, although fees remain far higher than pre-pandemic at around 12%, the company said.

Still, the company adds, U.S. shippers are not benefitting from these global declines in D&D charges. For example, Container xChange says, in May 2022 the average charges levied by container lines on customers two weeks after a box was discharged from the vessel at the port of Long Beach was $2730 per container, up from $2638 a year earlier.

The U.S. also comes out worse regarding D&D costs in regional comparisons in Container xChange’s Demurrage & Detention Benchmark 2022 report. By region, D&D charges in May in the US were the highest at $2,692 per container. This compared to $549 in Europe, $482 in India, $453 in China and $366 in the ‘Rest of Asia’.

"Throughout this pandemic, as shipping costs have soared and inflation has become a threat to the U.S. economy, the focus on container line behavior by politicians and regulators has magnified,” said Christian Roeloffs, co-founder of Container xChange. U.S. agricultural shippers have been particularly outspoken about their inability to find affordable empty containers for exports. But importers have been equally outraged by what many believe has been profiting on demurrage and detention charges by container lines. Some have started legal actions against carriers.

This really came into the cross hairs of President Joe Biden this year when he has been highly critical of container lines. His administration addressed D&D in the Ocean Shipping Reform Act and we’re now waiting to see how this will be implemented and whether it will change shipper or carrier behavior significantly. But with the political spotlight on inflation as recession threatens the U.S., it would not be surprising if we see more regulatory intervention in the future.”