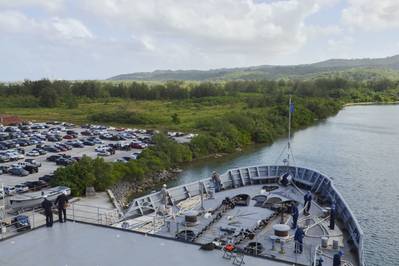 During sea trials, the crew, comprising uniformed Sailors and Military Sealift Command (MSC) civilian mariners, participated in more than three days of events and operations at sea to test the readiness of the ship.

“December has been a very busy and productive month for our team,” said Capt. Jeff Bierley, commanding officer of Frank Cable. “The ship and crew performed extremely well on sea trials, and it was great to get our ship to sea for the first time in over a year.”

According to Bierley, sea trials were a great way to conclude a very eventful year for the crew. Earlier in 2019, the ship underwent extensive maintenance and preservation work before relieving the submarine tender Emory S. Land (AS 39) as lead maintenance activity on the Guam waterfront.

Frank Cable, forward deployed to the island of Guam, repairs, rearms, and re-provisions submarines and surface vessels in the Indo-Pacific region.