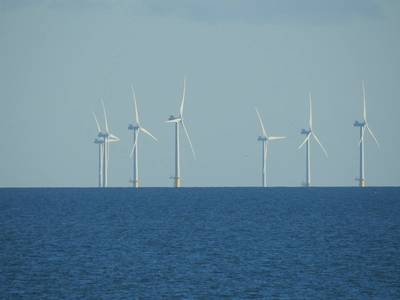 “The announcement formalizes the current situation and provides more confidence to developers and the supply chain,” said World Energy Reports' Philip Lewis. “Much of what is referred to in the statements is actually already currently under development.”

Lewis, author of the recently released “2021, the Year when Offshore Wind Takes Off in the United States”, clarified that the White House Fact Sheet discusses deployment of 30GW by 2030. “This does not actually mean 30GW will be installed by 2030. Rather, the Department of the Interior (DOI) is to review 16 Construction and Operations Plans (COP) by 2025, addressing developer concerns around the federal review timetable. This equates to 19GW which can be readily forecast to be installed by 2030,” Lewis explained. “This is similar to the 9GW of projects that have currently submitted COPs (our short-term forecast) plus 10.3GW of projects (our mid-term forecast) currently undertaking site assessments required to prepare the COPs.”

When asked how the 30GW will be achieved, Lewis said, “There is at least another 8.3GW of projects to be developed in the current 16 federal leases (identified in WER's intelligence package).”

“To support the initiative, the DOI announced that it is finalizing the preparation of the New York Bight wind areas which contain  approximately 3.8-5.8GW for federal leasing,” Lewis said.

Lewis mentioned that “as a result of the project activity from the northeast and Mid-Atlantic leasing, 31.4 to 33.4GW of projects are likely to be commissioned by 2035 which is required to meet the current northeast and Mid-Atlantic state procurement procurements, targets and commitments which amount to just over 32GW to be met between 2030 and 2035.”

The DOI has also reported that it will commence the review process for the COP for Ørsted’s 1,100MW offshore wind farm off New Jersey, which envisages offshore construction activities carried out in 2024 and possibly in to 2025. “The sequence of COP approval is interesting,” Lewis commented. “Ocean Wind was the fifth project COP submitted to BOEM, the federal agency managing the COP review process. Theoretically, Ocean Wind should be the fifth project reviewed by BOEM. The first two project reviews (Vineyard and South Fork) are well under way. It looks as if the next two projects have been pushed back down the review queue as one (Bay State Wind) has yet to secure a state procurement and one (Skipjack) is facing delays associated with landing the export cable.”

A key aim of the White House is to anchor one or two U.S. factories for each major windfarm component. Lewis said that this is broadly in line with WER findings. “Establishing wind turbine nacelle factories in the short-term will be a challenge, but plans are already well advanced for domestic factories for other key components such as the blades, towers, foundations and subsea cables,” Lewis said.

When asked about the target of four to six specialized turbine installation vessels (WTIV) at $250 million to 500 million each, Lewis noted that this is a new step. “One WTIV vessel is already under construction in the U.S. This target will help ease a potential supply shortage of installation vessels in the U.S. that we have identified, but the high U.S. capex (close to double South Korean and Chinese yards) and visible pipeline of shallow water projects suited to WTIV will remain a risk factor for asset investors.”

Lewis also pointed out, “There is no mention of other construction support and O&M support vessels in the statements – many of which will be required to be U.S. built as identified in our business intelligence package.”

Lewis concluded that “Building a local supply chain comes at a cost and will result in higher than market average capex for the first wind farms in the U.S. Scale will bring down costs in the longer term.”

When asked about the longer-term post 2030, Lewis indicated that the White House statement refers to a pathway of 110GW by 2050. “This means opening up new wind areas in the U.S. for development during the next decade, as discussed in our report,” Lewis said. “The statement does not mention California specifically, the expected first location for Pacific leasing. This will come, but there are some major barriers to be addressed to prepare California for commercial scale offshore wind farm.”