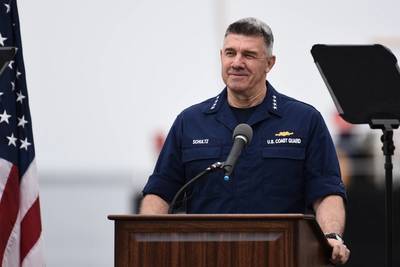 The Commandant of the United States Coast Guard delivered his first State of the Coast Guard address Thursday at Coast Guard Base Los Angeles-Long Beach in San Pedro.

Schultz also recognized the service and sacrifice of Coast Guard men and women deployed around the world ensuring global peace and prosperity, including servicemembers supporting U.S. Indo-Pacific Command and U.S. Central Command. He also honored servicemembers in San Pedro, who help ensure the safety and timely movement of vessels operating in the Ports of Los Angeles-Long Beach.

"We must make a difference today, for the Coast Guard of tomorrow," said Schultz. "Our Coast Guard men and women are united by a shared commitment and eagerness to serve, to demonstrate skill and courage, so that America’s Coast Guard will remain Semper Paratus—Always Ready.”

Schultz also made multiple policy and acquisition announcements including: