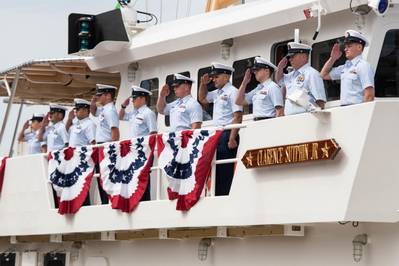 Each Sentinel-class cutter carries the name of a U.S. Coast Guard enlisted hero. The cutter's namesake is Boatswain's Mate 1st Class Clarence Sutphin Jr., a New York native who served in the U.S. Coast Guard from 1941 to 1945. During this time, Sutphin served as landing craft coxswain on board the attack transport USS Leonard Wood (APA 12), a landing craft supporting our troops in North Africa and Sicily.

In November 1941, just weeks before the Japanese attack on Pearl Harbor, 18-year-old Sutphin enlisted in the United States Coast Guard. He was born in 1923 and grew up in Valley Stream, Long Island. At Central High School, he wrestled and played football and baseball; however, he enjoyed sailing and fishing and worked as a deckhand on fishing smacks and pleasure boats. After enlisting, Sutphin attended boot camp at the Coast Guard Yard near Baltimore. He then received orders to the North Carolina coast to train in amphibious operations and landing craft, also known as Higgins Boats, landing troops in North Africa and Sicily.

When that operation was complete, the boat transited to the Pacific theater. During the Battle of Saipan in 1944, Sutphin helped oversee boat operations, including landing, loading, and salvaging landing craft as the USS Leonard Wood endured the heavy fire. During the conflict, he repeatedly risked his life to save others. He swam a towline to a landing craft stranded on a reef, saved another boat stuck on the beach under enemy fire, and came to the aid of eight Marines who a mortar round had struck. He provided first aid to the survivors and evacuated them to the nearest aid station.

Sutphin stayed aboard the Leonard Wood through May 1945 and participated in its eight primary amphibious operations. Sutphin was awarded the Bronze Star Medal for his “exceptional bravery under fire” during the Battle of Saipan.