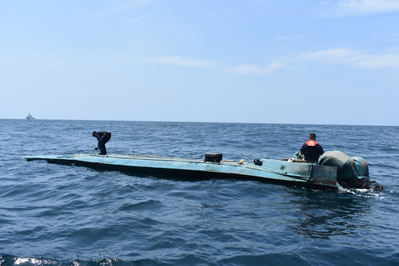 During their patrol off the coasts of Central and South America, Tampa’s crew successfully interdicted approximately 18,000 pounds of cocaine worth an estimated wholesale value of $240 million.

The Coast Guard increased U.S. and allied presence in the Eastern Pacific Ocean and Caribbean Basin, which are known drug transit zones off Central and South America, as part of its Western Hemisphere Strategy. During at-sea interdictions in international waters, detection and monitoring of suspects' vessels is a joint effort by allied, military or law enforcement personnel. The interdictions, including the actual boarding, are led and conducted by U.S. Coast Guardsmen.

Coast Guard Cutters Tampa, Dependable and Venturous worked with multiple interagency partners during the patrol and were able to prevent a combined total of nearly $380 million in cocaine from reaching the U.S.

The 18,000 pounds of cocaine seized by Tampa increases the ship’s total to nearly 17 tons of cocaine seized and 17 drug trafficking vessels stopped over the past two years. In addition, Tampa also conducted a combined boarding with the Ecuadorian Coast Guard.

The law enforcement phase of counter-smuggling operations in the Eastern Pacific are conducted under the authority of the Coast Guard’s 11th District headquartered in Alameda, California.

Tampa’s crewmembers also shared a personal nautical milestone as they crossed the equator during the patrol and earned the distinguished title of Shellback.

Commissioned in 1983, the Tampa is a multi-mission 270-foot cutter homeported in Portsmouth. The cutter is responsible for a variety of Coast Guard missions; including search and rescue, enforcement of laws and treaties, maritime defense, and protection of the marine environment.