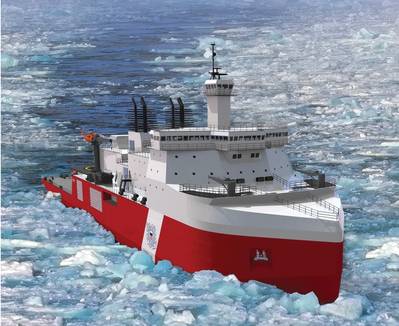 Meanwhile, Russia has approximately 30 active polar icebreakers, including four that are nuclear powered. Arktika, the first of a new class of three heavy polar icebreakers, has commenced sea trials in the Gulf of Finland, with the other two under construction. Recently plans were approved for a new super-icebreaker larger and more powerful than any in existence.

At the end of World War II, the United States had seven Wind-class icebreakers, the most technologically advanced icebreakers in the world.

PSC design
The design of the new Polar Security Cutter (PSC) is based on that of the German polar research and supply icebreaker Polarstern II. The vessels have an overall length of 460 feet and an overall beam of 88 feet. Each will have a full load displacement of approximately 22,000 long tons. The propulsion will be diesel electric at over 45,200 horsepower, making it capable of breaking ice between six and eight feet thick. The icebreaker will accommodate 186 personnel comfortably for an extended endurance of 90 days.

The design 45,200 hp for the PSC is less than that of Polar Star. But with twice its tonnage and with design and propulsion improvements, the PSC’s icebreaking capability is projected to be comparable. 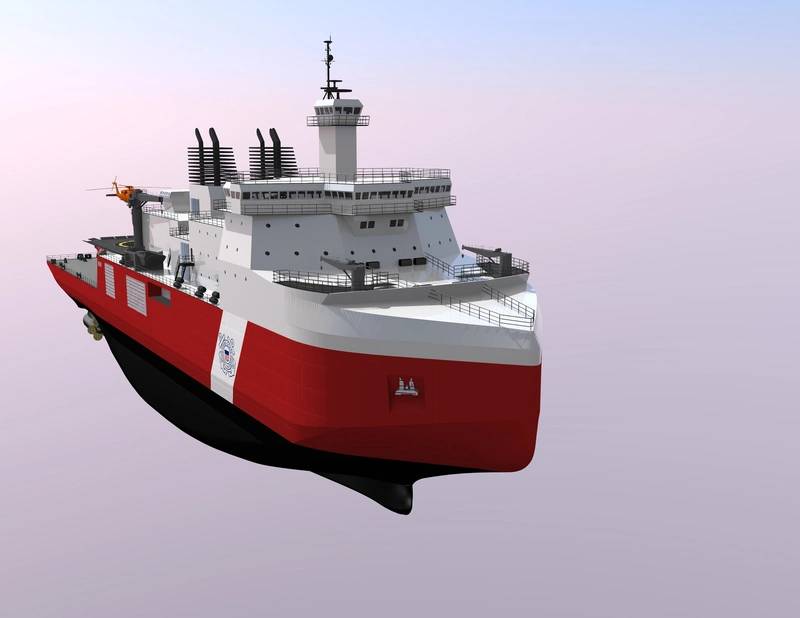 Credit: Halter Marine and Technology Associates, Inc.Required numbers of PSCs
In 2011, the DHS Office of Inspector General reported that due to a lack of sufficient assets the Coast Guard was unable to meet a variety of its own mission requirements in polar regions, as well as missions requested by the National Aeronautics and Space Administration (NASA), the National Oceanic and Atmospheric Administration (NOAA), the National Science Foundation (NSF), the Department of State (DOS), and the Department of Defense (DOD). The report also stated:

Should the Coast Guard not obtain funding for new icebreakers or major service life extensions for its exiting icebreakers with sufficient lead-time, the United States will have no heavy icebreaking capability beyond 2020 and no polar icebreaking capability of any kind by 2029. Without the continued use of icebreakers, the United States will lose its ability to maintain a presence in the Polar Regions, the Coast Guard’s expertise to perform ice operations will diminish, and missions will continue to go unmet.

In 2013 the Department of Homeland Security (DHS) approved a Mission Needs Statement (MNS) for the polar icebreaker recapitalization project. It stated that the Coast Guard will need to expand its icebreaking capacity, potentially requiring a fleet of up to six icebreakers (three heavy and three medium) to adequately meet mission demands in the high latitudes. The analysis took into account both the Coast Guard statutory mission requirements and additional requirements for year-round presence in both polar regions detailed in the Naval Operations Concept (NOC) 2010.

In 2017, the National Academies of Science, Engineering, and Medicine (NASEM) issued a report stating that the United States has insufficient assets to protect its interests, implement U.S. policy, execute its laws, and meet obligations in the Arctic and Antarctic because it lacks adequate icebreaking capability. The report recommended that Congress fund the construction of four polar icebreakers of common design to be owned and operated by the Coast Guard. The report noted that the fourth heavy polar icebreaker could be built for a lower cost than the lead ship of a medium polar icebreaker.

Procurement cost
The Coast Guard estimates the total procurement costs of its three planned heavy polar icebreakers as $1,039 million for the first cutter, $792 million for the second, and $788 million for the third. On April 23, 2019, the Coast Guard-Navy Integrated Program Office awarded a $745.9 million fixed-price, incentive-firm contract for detail design and construction of the first PSC to VT Halter Marine of Pascagoula, Miss. Construction is scheduled to begin in 2021, although the contract includes financial incentives for earlier delivery.

The contract includes options for the second and third PSCs. The Coast Guard plans to extend the service life of Polar Star until delivery of the second PSC, projected for FY2025. Congress is considering whether to fund the program as planned, whether to engage in a block buy of all three PSCs, and whether to procure three heavy and three medium polar icebreakers to a common basic design.

The PSC program has received a total of $1,169.6 million funding through FY2020. Planned budget requests for the PSC program for FY2021 and FY2022 are $555 million and $345 million respectively. If approved by Congress, the FY2021 appropriation would fully fund construction of the first PSC and allow initial work to commence on the second if the option is exercised.

Summary
After a long (too long) hiatus, rebuilding of the Coast Guard’s icebreaker fleet is finally moving ahead with all deliberate speed. The service with a long and storied history in polar waters will be back in force. Efforts must be taken to ensure that another gap in needed funding does not recur.

As Admiral Karl Schultz, Commandant, U.S. Coast Guard, recently said, “The mission has evolved so that you need to break ice to get to the mission, and just being there and accessing the Arctic is a projection of national sovereignty. It is a national security mission.”