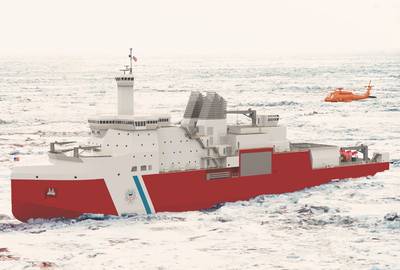 Pascagoula, Miss. shipbuilder Halter Marine has been awarded contracts to build the first two Polar Security Cutters, and the U.S. Coast Guard has an option for a third vessel. If all options are exercised, the total contract value is $1.9 billion.

"Detail work remains underway in preparation for construction of our first Polar Security Cutter," Admiral Schultz said in his address. According to the Coast Guard website, construction on the first PSC is expected to begin sometime this year.

Admiral Schultz called the Polar Security Cutter "a state-of-the-art ship, requiring exacting designs, complex steel work and systems integration," He added, "When our fleet of Polar Security Cutters becomes operational, the work of these uniquely capable assets will be essential to protecting our economic, our environmental and our national security interests in the polar, or what we call the high latitude, regions."

Halter Marine has partnered with Technology Associates, Inc., (TAI) to design the new ships. Each 460-foot-long icebreaker will have a 88-foot beam and full load displacement of approximately 22,000 long tons. A 45,200-horsepower diesel electric propulsion system will help make the vessels capable of breaking ice between six and eight feet thick. Polar Security Cutters will each accommodate 186 personnel comfortably for an extended endurance of 90 days.

The shipbuilder has also teamed with ABB for its Azipod propulsion and Trident Marine for its power distribution system, Raytheon for command and control systems integration, Caterpillar for the main engines, Jamestown Metal Marine for joiner package, and Bronswerk Marine for the HVAC system.