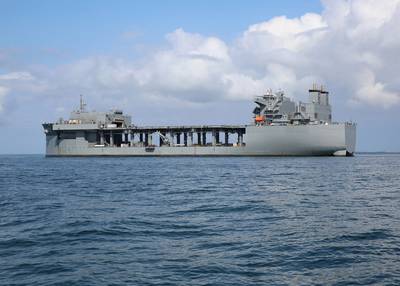 Built by General Dynamics NASSCO, the Montford Point-class is comprised of five ships across two variants: Expeditionary Transfer Docks and Expeditionary Sea Bases. Acting as a mobile sea base, ESBs are part of the critical access infrastructure that supports the deployment of forces and supplies to provide prepositioned equipment and sustainment with flexible distribution.

The ship is the first ship to bear the name of Marine Corps Chief Warrant Officer Four Hershel Woodrow Williams, the last surviving Medal of Honor recipient recognized for heroism at the Battle of Iwo Jima during World War II.

“This ship honors a man who dedicated his life to service—heroic service as a Marine, and continued service to his fellow veterans,” said Acting Secretary of the Navy Thomas Modly. “This dedication will live on in USS Hershel ‘Woody’ Williams as the ship is deployed around the world bringing additional capability to our growing fleet. The ceremony on Saturday will also represent the dedication to service demonstrated by the men and women who worked tirelessly to build this ship and their commitment to quality and innovation.”

Tracie Jean Ross and Travie Jane Ross, ship sponsors and daughters of Hershel “Woody” Williams, gave the first order to “man our ship and bring her to life!”