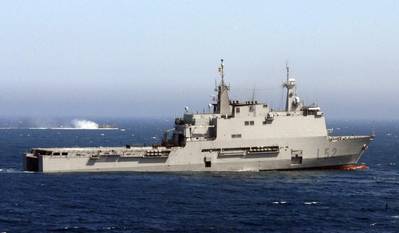 The ship’s decommissioning ceremony was held on the quay wall, alongside the moored USS Whidbey Island. The ceremony was attended by nine of her previous Commanding Officers and over 50 plankowners. “The last crew of Whidbey Island performed with great dignity and resiliency,” said Cmdr. Matt Phillips, the ship’s final commanding officer. “It’s been a privilege and an honor to lead this crew in executing her final mission.”
Whidbey Island was commissioned Feb. 9, 1985, at Lockheed Shipyard in Seattle. The first ship in a class designed specifically to interface with the landing craft, air cushion (LCAC), assisted in the operational and developmental testing of the amphibious assault craft from July to September 1985 and again in May and July 1986.

In August 1986, she embarked on her first major operation, participating in the NATO Exercise Northern Wedding/Bold Guard '86. She then made her first deployment to the Mediterranean in January 1987 during which time the ship took part in seven amphibious exercises and carried out duties as presidential support ship for the World Economic Summit in Venice, Italy, May 1987.

Whidbey Island was the first amphibious ship from the East Coast to deploy to the European Theater with LCACs. In September and October 1989, she participated in Hurricane Hugo disaster relief operations in the Caribbean Sea.

During the ’92-’93 deployment, USS Whidbey Island made historic port calls to Samsun, Turkey, Constanţa, Romania, and Burgas, Bulgaria. Her passage to these port calls made her the first United States amphibious ship and largest U.S. warship to operate in the Black Sea. The ship returned to homeport on June 5, 1993.

In August 1994, Whidbey Island rescued and transported over 8,100 Cuban migrants from the Straits of Florida during Operation Able Vigil and participated in the restoration of the legitimate government to Haiti during Operation Uphold Democracy.

On Aug. 28, 1995, Whidbey Island deployed for a fifth Mediterranean Deployment, spending over three months in the Adriatic Sea in support of peacekeeping operations for the Dayton Peace Accords in the former Yugoslavia. The crew received the Armed Forces Service Medal and the NATO Medal, returning to homeport Feb. 29, 1996.

In June 2006, Whidbey Island deployed in support of Operation Enduring Freedom. While in-port Aqaba, Jordan in July of 2006, the ship was recalled through the Suez Canal to support contingency operations due to the crisis in Lebanon. Whidbey Island subsequently participated in the largest non-combatant evacuation conducted by the U.S. Navy since Vietnam. During July and August, the ship evacuated 817 American citizens via LCAC with personnel transport module.

On Oct. 1, 2007, Whidbey Island deployed from Little Creek Naval Amphibious Base. After being deployed to the Horn of Africa, she assisted the M/V Al Marjan and its crew when they were released by Somali pirates.

On June 24, 2016, USS Whidbey Island deployed from Joint Expeditionary Base Little Creek-Fort Story, for what would be her final deployment. She conducted eight Theater Security Port Visits; country visits vital to reassuring host nations of the commitment of the United States to their partnership. On July 21, 2016, USS Whidbey Island transited the Bosphorus Strait during a time of tension following the failed 2016 Turkish coup d'état attempt.

“I am humbled to be with you on this bittersweet day as we gather here at Joint Expeditionary Base Little Creek – Fort Story to commemorate this ship’s near 38 years of commissioned service,” said Williams.

The ship is named after Whidbey Island, the largest of the islands composing Island County, WA. Whidbey is about 30 miles north of Seattle, and lies between the Olympic Peninsula and the I-5 corridor of western Washington. The island forms the northern boundary of Puget Sound. It is home to Naval Air Station Whidbey Island.