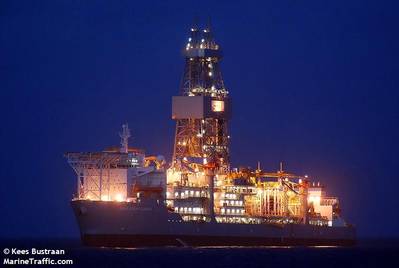 A Valaris drillship went adrift on Tuesday evening, breaking free from moorings near the port at Hunterston, North Ayrshire, Scotland.

According to BBC, which was the first to report on the incident on Wednesday, "a major rescue operation has been ongoing overnight," when the 228 meters drillship, Valaris DS4, broke free and started drifting without power.

According to the news agency, coastguard rescue teams, vessels, and a helicopter were dispatched to the scene, and no injuries have been reported.

Offshore Engineer has reached out to Valaris and Maritime and Coastguard Agency, seeking more info. Valaris did not immediately respond.

A Maritime and Coastguard Agency spokesperson said the following: "HM Coastguard received a mayday call just after 19:20 yesterday evening (02 February) after a drillship, with 8 crew onboard, broke from its mooring at Hunterston Terminal and started to drift without power."

"The vessel is now at anchor off Hunterston. A moored vessel at the terminal has also required assistance in the worsening weather and is currently being helped to hold its position by four tugs."

"An RNLI lifeboat, senior coastal operations officers, and three coastguard rescue teams remain on scene. This is an ongoing incident, and we have no further information at this time."

In a subsequent statement sent to Offshore Engineer on Wednesday a few hours after the initial response, MCA said: "The engines [on the Valaris DS4 drillships] have now been restored, and the ship’s technical managers are working with the Port Authority to return the ship to a place of safety."

Furthermore, Offshore Engineer has received a statement from Noah Shipmanagement, Technical Managers of the Valaris DS4.

Noah Shipmanagement said that the rig drifted into the Hunterston Channel, Fairlie, "when the quayside moorings failed last night at 7.20 pm, in very high winds."

The company said that Wednesday afternoon that the vessel remained in position in the Hunterston Channel, "safely anchored and with her engines and thrusters operational, should they be required."

"A crew of eight, including a Master and Chief Engineer, are on board to work with the local authorities and Marine Coastguard Agency to prepare for the return of the vessel to the lay-up berth once the weather improves. The [drillship] is anchored some 150/200 meters off the berth.  There were no injuries or pollution. Managers wish to thank the local authorities and the Port Management for their timely and professional response to this incident," Noah Shipmanagement said in an emailed statement.

According to AIS data, the drillship arrived from Las Palmas to the UK at the end of December 2020.

The Valaris 4 drillship, built in 2010 by Samsung Heavy Industries, was originally delivered to Pride International under the name of Deep Ocean Clarion. Drilling contractor Ensco in 2011 acquired Pride, renaming the deepwater drillship to Ensco DS-4. 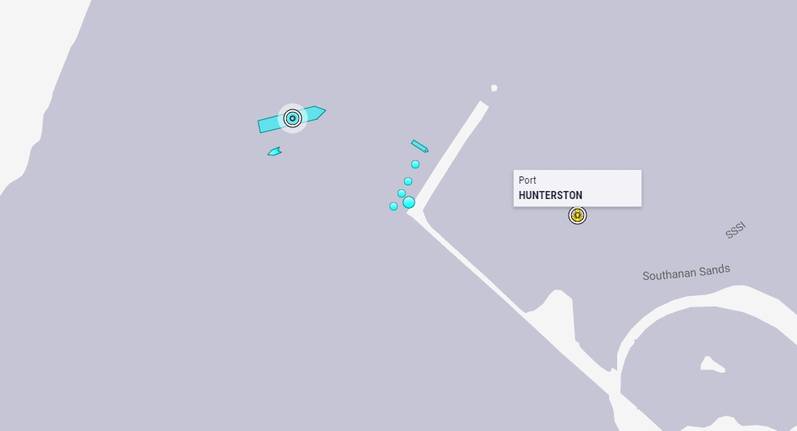 Map showing the location of Valaris DS4 drillship, with an RNLI lifeboat next to it - Credit: MarineTraffic

London-based Valaris, which was at the time of the merger the world's largest offshore drilling contractor by fleet size, in August last year filed for bankruptcy in a move to restructure its debt load and reduce debt by more than $6.5 billion.

The company at the time said the debt restructuring efforts were not expected to affect its day-to-day operations.

"Our customers should experience no interruption during this process. Our contracts remain intact, and we will operate as normal...The restructuring process will not affect the day rates," Valaris said in August 2020.

As with many other offshore drillers, Valaris was last year hit hard by the global coronavirus pandemic and the oil price crash, which forced its clients, the oil companies, to cut back on exploration and preserve cash.

This, in turn, forced Valaris to sell off or stack some of the drilling rigs without prospects for employment.

The company in April 2020 said it would stack three drillships, a semisubmersible, and five jack-ups for eventual return to service and retire 11 other drillships. Per the company's fleet status report released in April 2020, the Valaris DS-4 was one of the rigs being preservation stacked.

The company last year said it could take up to two years to reactivate idle rigs.