The Value of Friends in “High-Latitude” Places 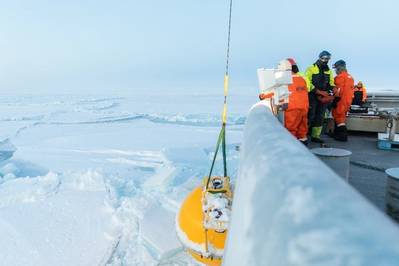 Mooring retrieved on board the Svalbard (photo credit: Daniel Fatnes of the Norwegian Coast Guard)

Who do you call when you need a job done on short notice, in total darkness, under 100-percent ice cover, thousands of meters at the bottom of the sea? In the case of the U.S. Office of Naval Research (ONR), you call your friends in Norway.

That is exactly what the Chief of Naval Research Rear Admiral Lorin C. Selby did when he enlisted the help of the Norwegian Coast Guard icebreaker and offshore patrol vessel, the CGV Svalbard, to retrieve oceanographic moorings containing irreplaceable data.

The work supported the Coordinated Arctic Acoustic Thermometry Experiment (CAATEX), an important international experiment to measure changes in the Arctic environment. Funded by the Research Council of Norway and ONR, CAATEX is designed to measure mean ocean temperature over great distances and long time periods to contribute to global warming research.

On Nov. 25, after more than a month at sea, the Svalbard returned to port in Longyearbyen in Norway after the successful recovery of three American deep-water moorings in the Beaufort Sea. Executed on short notice, in challenging conditions, the successful recovery is a tribute to the collaborative spirit, bravery and expertise of the Norwegian navigators and scientists. It is also a great example of how U.S. allies, such as Norway, act as force multipliers and important teammates in international research efforts that one nation simply cannot do alone. Moreover, it underscores the importance of ONR having a global presence—its ONR Global Command maintains a physical presence on five continents.

The Norwegian component of CAATEX is led by Nansen Environmental Research Center (NERSC) in Bergen, while the U.S. component is headed up by Scripps Institution of Oceanography (SIO) in San Diego. SIO was responsible for three moorings in the Beaufort Sea, while NERSC had responsibility for three moorings in the Nansen Basin, a deep-water basin North of Svalbard.  These six moorings form an acoustic network that synoptically measures mean ocean temperature across the entire Arctic Basin—a technique known as acoustic thermometry. Similar measurements were made 20 years ago and a comparison of this newest data with the old data will help scientists determine if the mean ocean temperature under the sea ice has increased—an important indicator of climate change.

The first moorings to be recovered were in the Nansen Basin.  The Svalbard successfully retrieved all three moorings in challenging conditions under 90-percent ice cover in July and August 2020.   Next, it was the U.S. partner’s turn to recover the remaining three moorings in the Beaufort Sea.  The U.S. Coast Guard’s lone medium-sized polar icebreaker, USCGC Healy, was scheduled to perform the mooring recovery.  After weeks of quarantine in Alaska and months of preparation, the U.S. teams were finally ready to embark.  However on Aug. 18, shortly after getting underway, the Healy suffered a fire in one of the ship’s main propulsion motors. The cruise was canceled and the 21-year old ship, one of only two ice-breakers owned by the U.S., returned to port for repair.

So began an international effort to save irreplaceable data that would contribute to invaluable research on the rapidly changing Arctic Ocean. On both sides of the Atlantic, scientists, Coast Guard personnel, State Department employees, and staff at ONR HQ in Washington and ONR Global in London worked feverishly to find a solution. Drs. Robert Headrick and Elena McCarthy, who fund Norwegian oceanographic research on behalf of ONR and ONR Global, respectively, along with the Norwegian PI, Dr. Hanne Sagen, strategized how the experiment could be salvaged. The only other U.S. icebreaker, the USCGC PolarStar, was preparing for its annual deployment to Antarctica. Chartering of commercial ice breakers was not an economically feasible solution.  No other icebreakers were found that had the unique capabilities required to recover the moorings. There were no viable options in the U.S. for the remainder of 2020.  The project would be set back by at least a year and millions of dollars if the moorings were not recovered.

The success of the CAATEX acoustic travel time measurements (and subsequent determination of Arctic heat content) depended heavily on recovering the moorings on both sides of the Arctic Ocean. Furthermore, the moorings had to be recovered while their on-board atomic clocks were still running.  If the moorings were not recovered in the fall of 2020, the atomic clocks would drain the battery over the winter and the data would be corrupted.

After exploring all options. Dr. Hanne Sagen, the Norwegian scientist in charge, suggested to ONR that the KV Svalbard be sent out again to recover the U.S. moorings. A request from the Nansen Center was sent to the Norwegian Coast Guard and Navy.  In spite of a long transit from Norway to the Beaufort Sea, and the danger of increasing ice concentrations and extreme Arctic weather, the Norwegian Coast Guard agreed that Svalbard and her crew could do the job. Dr. McCarthy, who focuses on international research in Norway, reached out to the Naval Attaché at the U.S. State Department in Oslo, who contacted his counterpart in the Norwegian State Department. The groundwork was laid for the U.S. Navy’s Chief of Naval Research Rear Adm. Lorin C. Selby to formally request assistance from Adm. Nils-Andreas Stensønes, the chief of the Royal Norwegian Navy, who promptly responded and agreed to take on the task. The final approval was given by the Norwegian Minister of Defense on Oct. 8, a few days before the ship’s departure from Florø.

John Woods of ONR Global’s Office of International Engagement Office (IEO) coordinated a team of Meteorology and Oceanography (METOC) operators from the U.S. Navy Fleet Weather Center-Norfolk and the U.S. National Ice Center (USNIC) to provide operational forecasts for weather, ocean and ice conditions.  This team worked closely with their Norwegian counterparts at the Norwegian Meteorological Institute (MET Norway), who had the responsibility to ensure the ship received the best available ice charts, satellite imagery and forecasts to assist with safe navigation. Personnel from MET Norway participated in the cruise to facilitate the data transmission from MET Norway and the U.S. centers, assist with ice interpretation and collect ship-based sea ice observations for the MET Norway program IceWatch (https://icewatch.met.no/). 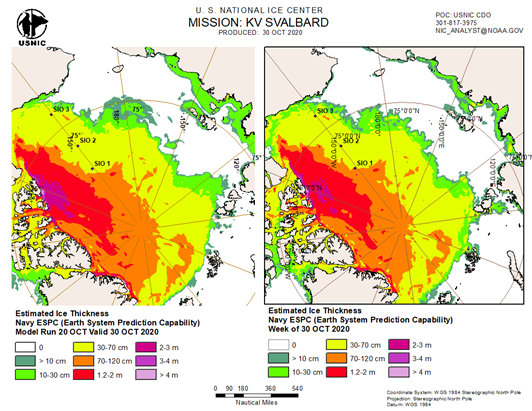 The Svalbard left the port of Florø on Oct. 12 to recover the final three moorings.  However, the headaches were not over. An engine problem had to be resolved along the way at a port call in Longyearbyen, before the ship could transit to the first and northernmost mooring. A Hercules aircraft was used to send essential spare parts for the engines up to Longyearbyen and eight engineers worked long days to get the engines ready. Finally, on Oct. 23, the Svalbard was on her way to the first and northernmost CAATEX mooring in the Beaufort Sea, following a transpolar route optimized to avoid heavy ice.

The recovery of the two northern-most moorings was challenging given the darkness and very low temperatures. Despite this, the recoveries went well. The transit to the southernmost mooring was the most difficult leg of the navigational effort and required breaking through numerous multi-year ice floes that were at times two meters thick and frozen into the first-year and newly frozen ice. The recovery of the last mooring proved the most challenging, when it surfaced beneath the ice and ultimately required under-ice divers to locate and free it. This last recovery operation took 48 hours of intense work. Quoting one of the U.S. scientists on board, “The Norwegians are amazing!” 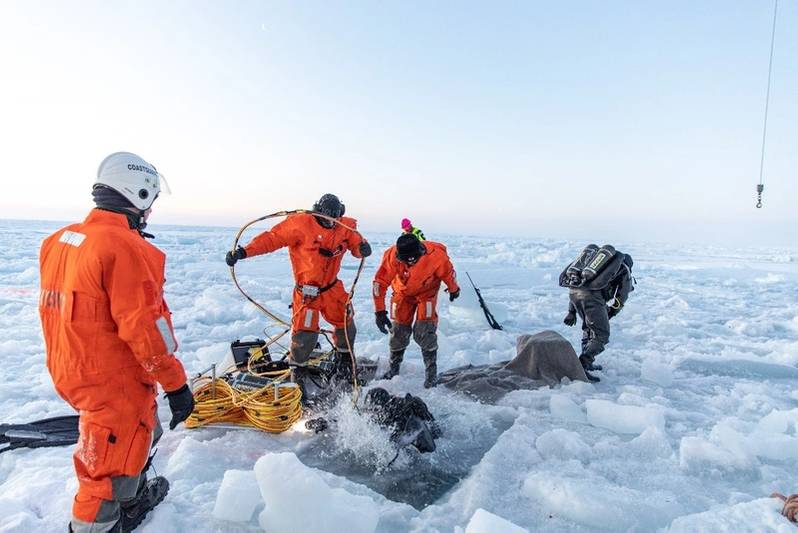 Norway’s Dr. Sagen emphasized, “CAATEX is viewed by the scientific community as an important and rare example of concrete collaboration between Norway and USA within polar research. It is also important to point out that on both sides the Coast Guard of the respective countries have been heavily involved, and this project and operation can be a good example of cross-border cooperation in the Arctic.” 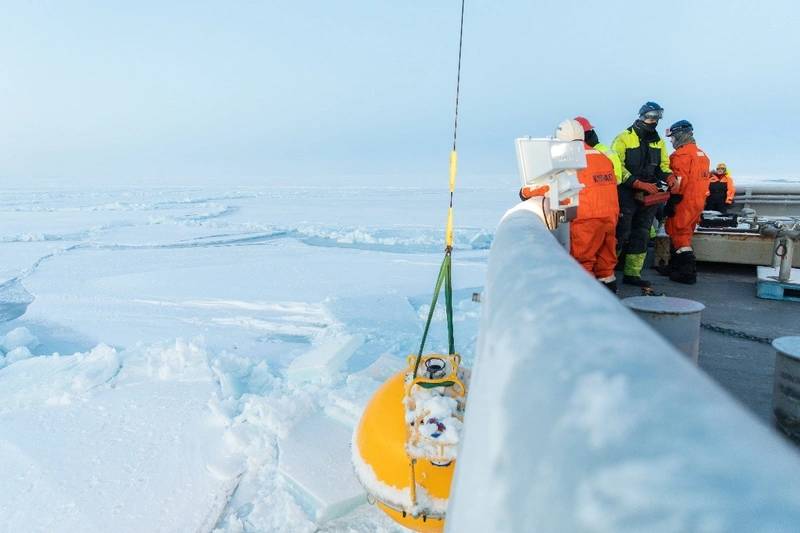 Figure 3. Mooring retrieved on board the Svalbard (photo credit: Daniel Fatnes of the Norwegian Coast Guard)

The successful retrieval of the moorings highlights the importance of collaboration in Arctic research activities, where one nation often cannot do everything. Partnerships with allies like Norway provide the U.S. with an increased capacity for high-latitude research in the Arctic, an area of increasing strategic importance. The success of the CAATEX experiment underscores the value of multi-national scientific research agreements such as the recently signed International Cooperative Engagement Program for Polar Research (ICE-PPR).

Upon learning of the Norwegians successful recovery of the moorings, Rear Adm. Selby wrote to Norway’s Vice Admiral Stensønes, “[The commanding officer Geir Martin Leinebø] deserves so much credit for the vision and confidence he displayed in the execution of the recovery mission. I trust we will continue to see our partnership under ICE-PPR strengthen.”

This experience underscores the importance of having an enduring international presence; our relationship with Norway proved invaluable to the successful completion of CAATEX. As the commanding officer of ONR Global Capt. James Borghardt said, “The way to establish, maintain and expand international trusted partnerships is an enduring presence. Presence, in every sense of the word, is what can turn a contact into a trusted partner. Presence includes being physically available in their country or in their time zone. Presence is a familiar rapport supported by common interests. Presence is sharing a meal, an idea or even a connection.”