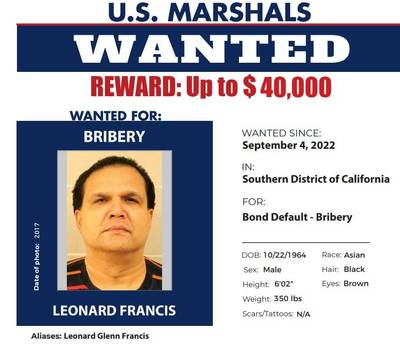 Venezuela's top court has ruled to give the U.S. government 60 days to request the extradition of fugitive Malaysian businessman Leonard Glenn Francis, also known by his alias "Fat Leonard," who is implicated in a U.S. Navy bribery case.

The supreme court ruling was issued last week but only made public on Wednesday by a reporter with official media.

Francis was arrested on Sept. 21 at Caracas' main airport as he prepared to leave for Russia. The U.S. government had previously issued a red flag request through Interpol for his detention.

The Venezuelan court decision comes as long-strained relations between Washington and Caracas appear to improve in recent months.

The court said it will notify the United States through Venezuela's foreign ministry, including its decision that a formal extraction request be filed within two months and include evidence of Francis' alleged crimes.

If U.S. authorities do not comply within the two month limit, the businessman's "unrestricted release" will be ordered, the court added in its ruling dated October 13.

Francis arrived in Venezuela from Mexico with a stopover in Cuba and was planning to travel to Russia, according to Interpol Venezuela.

He reportedly removed his monitoring anklet and escaped house arrest in the United States ahead of his looming sentencing in September, according to a the San Diego Union-Tribune.