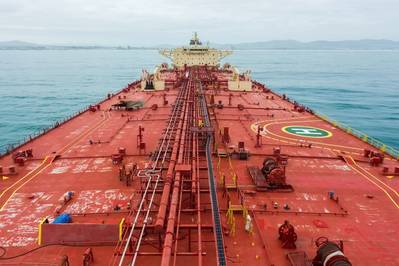 Venezuela's oil exports ticked higher in April after falling in March to their lowest average in seven months, helped by new trading partners that were re-selling cargoes in Asia, according to documents from state-run PDVSA and vessel tracking data.

Venezuela shipped 31 cargoes of crude and refined products last month carrying an average of 848,500 barrels per day (bpd), a small increase from the 814,000 bpd the previous month, the data showed.

This year, the United States sanctioned two units of longtime PDVSA business partner Rosneft over allegations of hiding the country of origin for Venezuelan crude shipments.

U.S. President Donald Trump's administration set a May 20 deadline for the Russian energy giant to wind down purchases of Venezuelan oil and for ultimate customers to buy from Rosneft.

Those measures hit Venezuela's oil exports in March. Rosneft, which had been re-selling up to two-thirds of the cargoes, and other key customers such as India's Nayara Energy and Reliance Industries cut purchases from PDVSA.

But others, primarily Mexico-based Libre Abordo and Schlager Business Group, replaced Rosneft as the largest intermediaries of Venezuelan crude under an oil-for-food pact. That agreement is under investigation by U.S. authorities.

China last month was again the largest direct destination for the crude with about a quarter, or 191,000 bpd. Malaysia, an active hub for trans-shipment and blending of Venezuelan oil, received about 290,000 bpd. A large percentage of barrels passing through Malaysia ends up in China as well, Refinitiv Eikon tanker tracking data showed.

India, one of the top three destinations for Venezuelan oil this year, reduced its share of exports to 8% of the total, while Europe took 16%. Maduro's main political ally, Cuba, received 7% of exports or 58,000 bpd.

Rosneft in March sold all its Venezuelan assets to an undisclosed firm owned by the Russian government. U.S. officials have said sanctions on Rosneft's trading units could be lifted once it is clear they are no longer involved in Venezuela.

With Rosneft's departure, Libre Abordo and a related firm, Schlager Business Group, were responsible for handling almost 40% of PDVSA's sales last month, a large increase over volumes received from January through March. The firms have since 2019 received over 26 million barrels of Venezuelan oil.

PDVSA did not respond to a request for comment.

Libre Abordo told Reuters in a written statement that oil volumes to be received from PDVSA to fulfill the swap agreement depend on prices, freight tariffs and other operative costs.

"Volatility in crude prices, which sometimes have closed in negative numbers, does not allow us to clearly calculate the total volume that will be exchanged," it said.

The Mexican firms began lifting Venezuelan oil in December after signing an agreement with Maduro's government to exchange Venezuelan oil for corn and water trucks, which started arriving in the crisis-stricken country last month.

The companies largely have replicated Rosneft's model for marketing Venezuelan oil, covering the same routes, using the same trans-shipment hubs and offering the cargoes mostly to the same customers, according to trading sources.

Libre Abordo and Schlager last week said that the oil-for-food pact was signed for humanitarian reasons, after legal revisions to make sure it did not violate U.S. sanctions.

U.S. Secretary of State Mike Pompeo and special envoy for Venezuela, Elliott Abrams, last week said the State Department, the Treasury and the U.S. Embassy in Mexico are investigating firms they believe are acting as shell companies.

Ukraine's Odessa Gets First WTI Oil Cargo from US