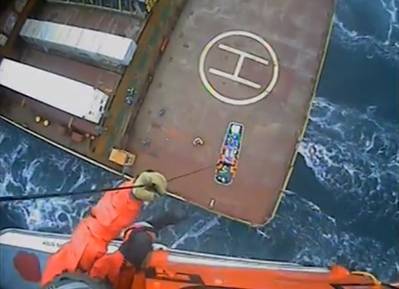 A U.S. Coast Guard said it medevaced a woman from a containership off the Washington coast Saturday after she was having difficulty breathing and experiencing temporary unconsciousness.

At the time, the 710-foot container ship, Matson Kodiak, was transiting westbound in the Strait of Juan de Fuca.

The command center diverted an MH-65 Dolphin helicopter crew from Air Station Port Angeles who was already airborne near Seattle.

At 1 p.m., the rescue crew arrived on scene near Neah Bay, deployed the rescue swimmer to assist, and safely hoisted the woman. The aircrew then proceeded en route to Olympic Medical Center in Port Angeles, where the woman was transferred to higher medical care at 1:50 p.m.

The patient’s medical condition is unknown, the Coast Guard said.

Lawmakers in the U.S. are reintroducing legislation aiming codify the U.S. Coast Guard’s icebreaking mission on the Great…