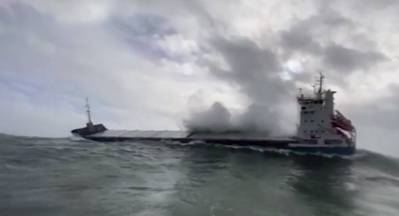 Three rescue craft came to the aid of a disabled cargo ship adrift in heavy seas and in danger of hitting the rocks off the Irish coast.

The Antigua Barbuda-flagged general cargo vessel Lily B reported to MRCC Dublin Tuesday afternoon that it had lost power off the Waterford Harbor, southeast of Ireland.

The Irish Coast Guard called upon three Royal National Lifeboat Institution (RNLI) lifeboats from Dunmore East, Kilmore Quay and Rosslare to aid the drifting vessel until a tug could arrive.

Dunmore East's Trent, Kilmore's Tamar and Rosslare Harbour's Severn secured tow lines to the Lily B and battled 6-meter swells for 12 hours to ensure the cargo vessel remained at sea away from the rocks, said volunteer organization RNLI.

The tow was passed to a Waterford based tug on its arrival Tuesday evening, and the stricken cargo ship was towed to Waterford in the early hours on Wednesday.

"If it wasn’t for the work of the three lifeboat crews out in force eight conditions I fear the vessel would have hit the rocks and there could have been a serious loss of life," said David Maloney, Rosslare Harbor RNLI Lifeboat Operations Manager. "The 4,000-tonne vessel came within a half a mile of the shore and Dunmore East and Kilmore Quay lifeboat crews had an incredibly difficult job in keeping it away from the rocks."

"The seas were huge, and it would not have been pleasant for anyone out there in those conditions. The lifeboat crews were out for over 12 hours in a callout that involved serious skill and concentration, and I am tremendously proud of all three lifeboat crews involved. Thankfully we did not have a tragedy today," Maloney said.