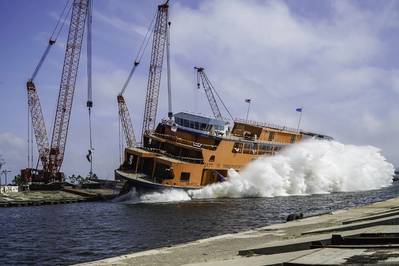 "For more than 200 years, the Staten Island Ferry has been a symbol of New York City's harbor and an integral part of our city's transportation system," said Congresswoman Malliotakis. "As the only member representing New York City on Transportation and Infrastructure and the Subcommittee on Coast Guard and Maritime Transportation, it was very insightful to see the shipbuilding company that has built the latest class of Staten Island Ferries and FDNY boats that have made their way in and around my district, along with the new class of U.S. Coast Guard cutters that will modernize our Coast Guard's fleet."

Malliotakis added, "Staff Sgt. Michael Ollis is our hometown hero who bravely gave his life for our nation. His name is one that all Staten Islanders can be proud of as they view the best sites New York City has to offer."

"It’s a distinct privilege for Eastern to have Congresswoman Malliotakis sponsor the third Staten Island Ferry," said Joey D'Isernia, President of Eastern Shipbuilding Group. "Her presence here today illustrates the critical nature of this maritime infrastructure project and both her and Eastern’s absolute commitment to the residents of New York City. We are honored that Congresswoman Malliotakis made such an effort during these challenging times."

Expected to arrive in New York harbor in 2022, the third Ollis Class ferry is named to honor Dorothy Day, the revered social activist and journalist who spent decades on the Island’s South Shore.

“Dorothy Day lived a life of tremendous selflessness and service. I can think of no greater way to honor her beloved legacy than by having her name on this new ferry boat connecting Manhattan and Staten Island,” said New York City Mayor Bill de Blasio. “Day loved Staten Island, and this naming will allow others to learn of her inspiring work as a brave activist and journalist. I thank Day’s surviving family for doing keeping the memory of her work alive, and hope every New Yorker can draw inspiration from her legacy.’”

The Dorothy Day is part of a major $300 million investment announced by the Mayor in 2014 to bring larger and more state-of-the-art ferries into service connecting lower Manhattan to St. George, Staten Island. The three new 4,500-passenger ferry boats – the first new boats added to the fleet since 2006 – were funded with a combination of federal, city, and other grant funds.

The new Staten Island Ollis Class ferries series are named after fallen soldier of the US Army 10th Mountain Division at Fort Drum, 'Climb to Glory', Army Staff Sgt. Michael H. Ollis, a Staten Island native killed in Afghanistan on August 28, 2013 serving during Operation Enduring Freedom. The first of the series, Hull 219, is named in his honor. Staff Sgt. Michael H. Ollis, of the 2nd Battalion, 22nd Infantry Regiment, 1st Brigade Combat Team, 10th Mountain Division (Light), stepped into the path of a Polish officer, blocking him from the suicide vest of an insurgent who had raided Forward Operating Base Ghazni. Ollis has received several honors posthumously including: Distinguished Service Cross, Purple Heart, Bronze Star, Silver Star, The Audie Murphy Medallion, Polish Gold Star Medal of Honor, and the Afghanistan Star from Poland for his valor. He was 24 years old.

The series' first vessel, Michael H. Ollis, is expected to arrive in in New York harbor in June and following extensive preparation and staff training, is scheduled to begin regular passenger service in November 2021.

The second ferry in the Ollis Class, the Sandy Ground, honors one of the nation’s first Black settlements—located on Staten Island’s South Shore, which also served as a stop on the Underground Railroad. The Sandy Ground is expected to arrive in New York in December 2021 and begin regular passenger service in 2022.