Video: Russian Bulker Aground Off England 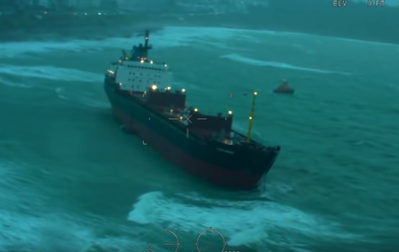 Rescue vessels were heading to assist a Russian bulk cargo ship after it ran aground off beaches in southwest England, Britain's coastguard said on Tuesday.

The 180 meter (590 ft) long ship, with 18 Russian crew on board and which the British media said was the Kuzma Minin, dragged its anchor in strong winds and grounded between the Swanpool and Gyllyngvase beaches near Falmouth in Cornwall.

"There is no cargo on board. She currently has a list of five degrees but there is no report of any pollution," the coastguard said in a statement.

"Tugs are on their way to the vessel and a lifeboat is standing by at the scene. The Falmouth Coastguard Rescue Team have cordoned off an area around the ship."

The coastguard said the plan was to refloat the ship when the tide rose.