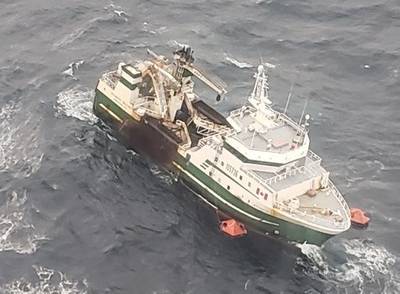 Thirty-one fisherman have been rescued from a fishing vessel that caught fire and began to sink off the coast of Eastern Canada.

At 7:05 p.m., Tuesday, the Joint Rescue Coordination Center in Halifax notified watchstanders at the U.S. Coast Guard First District Command Center that the 143-foot Atlantic Destiny was disabled with a fire on board, and was taking on water in 26-foot seas and 35-mile-per-hour winds.

The U.S. Coast Guard Jayhawk crews hoisted another 21 fishermen between the two helicopters. All hoisted crewmembers were taken to Yarmouth, Nova Scotia, where they were transferred for medial assessment.

The remaining four crewmembers, and the two SAR technicians, ceased dewatering efforts and were transferred to the Canadian Coast Guard Ship Cape Roger shortly after 7 a.m. Wednesday morning. The Atlantic Destiny sank to the bottom at 9:36 a.m.

“We have a strong connection with our Canadian partners,” said Capt. Wes Hester, the 1st Coast Guard District chief of response. “We conduct joint training every year with our partners in Greenwood, and our crew’s consistent training, coordinated responses, and international partnership saved 31 lives yesterday. That monumental effort is a testament to the hard work and sacrifice of everyone involved.”

“We were very fortunate to have had the support of the U.S. Coast Guard during this rescue. Their ability to provide such valuable support in the saving of the lives of these fishermen is very much appreciated and demonstrates how important our relationship is in providing search and rescue services to both Canada and the United States.” Maj. Kristin MacDonald, Officer in Charge, Joint Rescue Coordination Centre Halifax.

The Atlantic Destiny is one of Canada-based Ocean Choice’s six offshore fishing vessels. The vessel harvests frozen at sea scallops; and Riverport, Nova Scotia is the port of call for the vessel. At the time of the incident the vessel was in the George’s Bank area.

“While we are deeply saddened by the loss of one of our offshore fishing vessels we are extremely relieved and thankful that all of our 31 crew members were safely transported ashore and are currently in the process of reuniting with their families and loved ones,” said Martin Sullivan, CEO, Ocean Choice.

Ocean Choice said it will fully cooperate with authorities during the investigation into the cause of the incident.