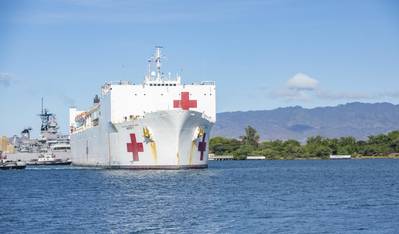 This contract was competitively procured with proposals solicited via the System for Award Management website and one offer was received.

USNS Mercy is the lead ship of her class of hospital ships in non-commissioned service with the U.S. Navy.

Originally built as an oil tanker, SS Worth, by National Steel and Shipbuilding Company, San Diego, in 1976. the ship was renamed and converted to a hospital ship by the same company starting in 1984. Mercy was placed in service in 1986 with the primary mission is to provide rapid, flexible, and mobile acute medical and surgical services to support Marine Corps Air/Ground Task Forces deployed ashore, Army and Air Force units deployed ashore, and naval amphibious task forces and battle forces afloat. Secondarily, it provides mobile surgical hospital service for use by appropriate U.S. Government agencies in disaster and humanitarian relief, and limited humanitarian care incident to these missions and to peacetime military operations.