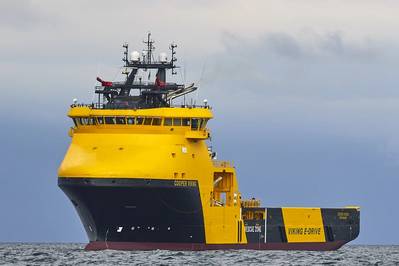 Viking Supply Ships, a Swedish offshore vessel operator, said on Friday that activity in the offshore support vessel market remained sluggish in the first quarter of the year due to lower investment levels in the offshore oil and gas industry, as well as seasonally low demand.

The company, however, expects higher activity and somewhat higher rates and utilization during the summer season, as well as to benefit from the recent addition of two dual-fuel platform supply vessels to its fleet.

"The first quarter of the year is usually impacted by seasonal low activity in the North Sea, and with the continued adverse impact of the COVID-19 pandemic, this was also true in 2021. During the quarter there were short periods with a tighter market, where rates and utilization improved. However in total, the revenue levels remained at low and unsatisfactory levels," Trond Myklebust, the company's CEO said.

The group, which operates a fleet of ice-breakers, anchor handlers, and platform suppliers, in the first quarter took delivery of the first of two ice-classed PSVs, Coey Viking, from Remontowa Shipyard in Poland. The delivery of the two vessels marks the Group’s re-entry into the PSV segment.

"The vessels are high specification, large PSVs with dual-fuel and hybrid capabilities. With their reduced carbon footprint, the vessels will be an attractive addition to the Group’s fleet. Coey Viking was fixed on a term contract with Wintershall on the Norwegian continental shelf and commenced the contract upon arrival in the North Sea during February," Viking Supply Ships said.

The second vessel, the Cooper Viking was delivered post 1Q, in mid-April, from the same shipyard.

While the 1Q revenues were not satisfactory, Myklebust noted the improvement in the oil price during the quarter, as well as in other key financial indicators.

"Brent is currently trading between USD 65-70 per barrel, and energy-related equities have shown clear improvement throughout the quarter. The oil price is historically the single most important driver for the OSV market through its impact on the investment level within the global offshore oil and gas industry," he said.

Talking about the newbuild PSV deliveries, Myklebust said: "With its environmentally friendly profile (dual-fuel and hybrid capabilities yielding reduced carbon footprint), we have a strong belief that these vessels will be a successful venture for the Group. This belief is further strengthened by fixing both vessels on contracts to clients on the Norwegian continental shelf prior to delivery."

"The global pandemic has persisted throughout the quarter and although vaccination programs are progressing at an escalating pace, COVID-19 will likely continue to have a significant impact on economic activity throughout 2021. With the distribution of vaccines increasing considerably each month, it is estimated that travel restrictions can be eased significantly throughout the summer. This is expected to have a positive effect on the overall economic situation and more specifically drive demand for oil and gas, which in turn is a positive indicator for the offshore oil and gas industry," he said.

He also said that it is likely that the activity within the OSV segment will remain subdued throughout 2021 due to long planning cycles within the industry.

"It is also vital that shipowners continue to demonstrate discipline with regards to reactivating vessels in lay-up, as this can potentially impair an eventual market recovery. With expectations of a modest increase in the active rig fleet, the North Sea market is exiting the low season," Myklebust said.

"The summer season is usually characterized by higher activity in the market which should result in somewhat higher rates and utilization for the coming months. The Group will continue to focus on obtaining long-term contracts for its vessels and will focus on its unique competence within the harsh environment and arctic markets to navigate through the downturn," the CEO added.

He also reminded that there was a risk that the company would need to take further measures to strengthen its liquidity during 2021 as a result of the prolonged market downturn.

"Given financial institutions’ reluctance to provide financing to the OSV industry, it is not unlikely that liquidity must be secured through a capital increase," he said.