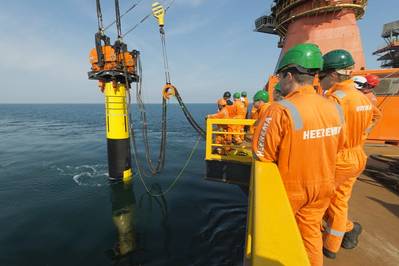 Vineyard Wind, the developer of the first major U.S. offshore wind farm, said on Tuesday it will miss its target to start sending power to Massachusetts by 2022 due to lengthy federal permitting delays.

The Bureau of Ocean Energy Management, part of the U.S. Department of Interior, posted a revised permitting timeline on its website on Tuesday that said it will issue a final decision on the project by Dec. 18, more than a year after its previous target of August 2019.

"While we need to analyze what a longer permitting timeline will mean for beginning construction, commercial operation in 2022 is no longer expected," Vineyard Wind Chief Executive Lars Pedersen said in a statement.

Vineyard Wind is a joint venture between Copenhagen Infrastructure Partners and Avangrid Inc.

The project, 14 miles (23 km) off the Massachusetts coast, has experienced several delays already over concerns https://www.reuters.com/article/us-usa-wind-fishing-exclusive/exclusive-first-big-us-offshore-wind-project-hits-snag-due-to-fishing-industry-concerns-idUSKCN1UO0EK that its wind turbines will impact commercial fishing and navigation. The Department of Interior has said it needs time to study the impacts of such projects, due to the growing number of offshore wind farms planned for the East Coast.

The 800-megawatt project would power more than 400,000 homes, making it the first large-scale offshore wind farm in the United States. Its regulatory struggles are being closely watched by competing offshore wind developers and northeastern U.S. states amid surging demand for climate-friendly power sources.

The next milestone in BOEM's review of the project is the June publication of a supplement to the environmental review that will evaluate the projected cumulative impacts of several major offshore wind projects. The agency had previously expected to publish that supplement early this year.

BOEM officials did not immediately respond to a request for comment on the timeline.

"Regulatory delays - especially of a new industry - could open the door to unexpected and unintended bottlenecks and holdups," NOIA President Erik Milito said in a statement.

The U.S. currently has just one five-turbine offshore wind farm in operation. Including Vineyard Wind, 14 large offshore wind projects are expected to come online by 2026, according to the American Wind Energy Association.