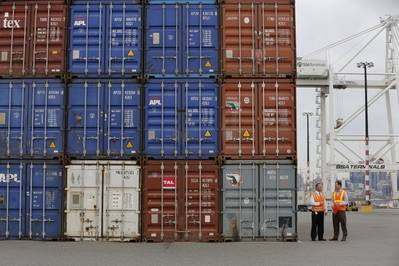 Container volumes grew despite the slowing Chinese economy and volume declines earlier in the year during West Coast labor negotiations.
The ports of Seattle and Tacoma formed The Northwest Seaport Alliance in August to strengthen the Puget Sound gateway—the third largest in North America—and create more economic opportunities.
“The Northwest Seaport Alliance allows us to compete more effectively on behalf of our customers and attract more cargo to the Puget Sound region, which translates to more family-wage jobs in our communities,” said CEO John Wolfe.
International containers grew 8 percent. Full containers fueled the nearly 5-percent gain in imports to 1.4 million TEUs. Export containers improved 12 percent to 1.3 million TEUs, powered by the high volume of empty containers being sent back to Asia.
Domestic volumes fell 8 percent to 768,635 TEUs. Alaska’s economy has slowed due to record low oil prices, resulting in less oil and gas-related project cargo heading north.
Auto imports reached a new record in 2015, up 4 percent to 183,305 vehicles. Meanwhile breakbulk cargo—items too large of bulky to fit in a container—fell nearly 8 percent.
“With the strong support from our labor partners, along with a focus on operational excellence, customer care and strategic infrastructure investments, we expect to continue to see an increase in cargo volumes and related jobs in the region,” Wolfe said.