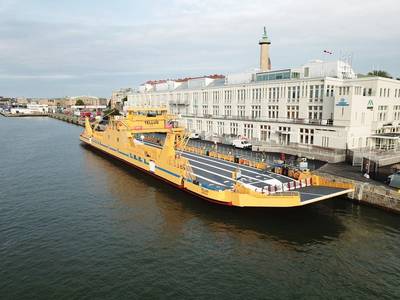 Volvo Penta gensets are powering the largest electric-hybrid ferry in Sweden. The Tellus ferry operates the 1.8km-wide Gullmarsleden waterway between Uddevalla and Lysekil – one of Sweden’s busy maritime routes. We take a look at the motivations, collaborations, and technology behind this installation.

The Tellus ferry was commissioned by the Swedish Transport Administration and built by Baltic Workboats Shipyard – an Estonian company that’s made over 200 workboats and who currently have 30 workboats on order. The 100m-long ferry took 16 months to build and can carry cars, trucks as well as 300 passengers.

The ferry has two electric-driven POD propulsion units, one at either end of the vessel – so that it doesn’t have to turn to go back and forth across the fjord. Energy to the propulsion units is taken either from the batteries or from four Volvo Penta D16 MH engines. These engines drive synchronous reluctance assisted permanent magnet (SRPM) technology generators. These units can be driven individually or all four in parallel to optimize fuel consumption and emissions. These marine gensets have been supplied by the Baltic state Volvo Penta Center BMG Power Systems.

BMG Power Systems specializes in heavy-duty engines and has a longstanding relationship with Volvo Penta in the marine commercial, leisure, and industrial segments. It also has a unique partnership with Baltic Workboats Shipyard, which spans over 10 years making it the perfect bridge for a project like this.

The power of four

While there are four Volvo Penta D16 engines onboard for the majority of the time the ferry usually only needs one engine to power its trips. The other engines are precautionary, needed only during tough weather and sea-ice conditions.

In addition to the D16 MH variable speed engines found in Tellus, Volvo Penta also produces MG engines. Volvo Penta’s IMO II-compliant constant speed engines now produce 479 kWm at 1,500 rpm and 532 kWm at 1,800 rpm, corresponding to a 50 Hz genset providing 450 kWe and a 500 kWe delivery at 60 Hz. The MG engine has the toughest marine genset rating, ensuring high output around the clock, with a reduction of fuel consumption of up to 3% – compared to the older version of the engine. All Volvo Penta engines accept HVO, which means emissions can be cut to next to nothing. Volvo Penta is unique in that it is one of the only manufacturers making DC gensets that directly charge batteries and DC-motors in diesel-electric systems with no batteries.

Engines driving us towards electromobility

The move towards electromobility is vital and Sweden was among the first nations to pledge to reduce its emissions and become fossil-free by 2045. These commitments have resulted in increased demand in the market for more powerful gensets to power auxiliary systems, hybrid vessels, and diesel-electric vessels. To meet these demands – for more power – Volvo Penta has upgraded its D16 range to meet 450 and 500kWe.

The Swedish Transport Administration’s goal is to go fully electric. However, current infrastructure cannot support full-electromobility and electric vessels cannot travel long distances, therefore, there has also been a trend of using these gensets as alternative propulsion systems to power diesel-electric hybrid vessels – until the charging infrastructure is in place. This is the case for the Tellus ferry. For the moment, Tellus’ 12 Corvus battery-racks – with a total capacity of 949 kWh – are being charged at night via an onshore charging station and can also be charged by the Volvo Penta D16 engines while in operation. The ferry can currently complete three trips in full electric mode before the D16 gensets are needed to take over.

Volvo Penta is an active player in supplying the hybrid solutions market and continue to work hard to improve their power solutions to propel the electromobility journey.