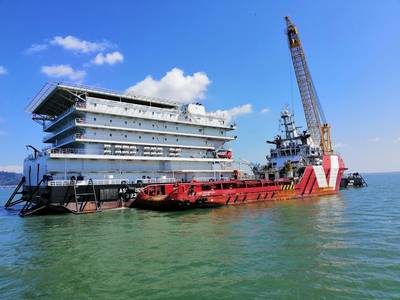 VOS Champion, which had been under charter to Chevron earlier this year, was delivered to her new charterers in early November and immediately mobilized to Sandakan, Malaysia. Upon arrival, the first task was to connect her towing wire to Coastal Contracts Bhd’s accommodation work barge (AWB) Asia Pride 39308 (AP39308). Both units will form part of a marine spread supporting the charterers’ deepwater development and offshore brownfield modification project off the East Coast of India. Operating from the port of Kakinada, VOS Champion’s primary duty will be to tow, run anchors and provide support to the AWB.

VOS Champion will initially tow AP39308 to Batam, Indonesia. Here, she will load cargo and assist the AWB in conducting mooring trials, before commencing a tow to the area of operations off the Indian coast.

VOS Champion is a KCM 65m 6,500 BHP AHTS vessel, operated and managed by VOS Singapore. Delivered to Vroon in 2016, she is one of a series of six such vessels designed for the company by Khiam Chuan Marine, in collaboration with Vroon’s Performance and Engineering Department, and constructed at Fujian Southeast Shipyard in Fuzhou, China.