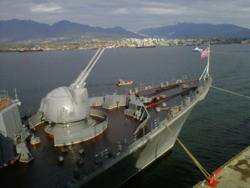 The naval squadron, including the Varyag missile cruiser, three Udaloy class destroyers and three fleet support ships, will join 16 Chinese surface ships for drills in the Yellow Sea between Aril 22 and 27.

"The exercises will involve several simulated missions, including the rescue of a hijacked ship, the escort of a commercial vessel, and the defense a convoy from air and sea attacks," a Russian defense ministry spokesman said.

Russia and China have held a number of joint military exercises since 2005 within the framework of the Shanghai Cooperation Organization, which also includes the Central Asian countries of Kazakhstan, Kyrgyzstan, Tajikistan and Uzbekistan.