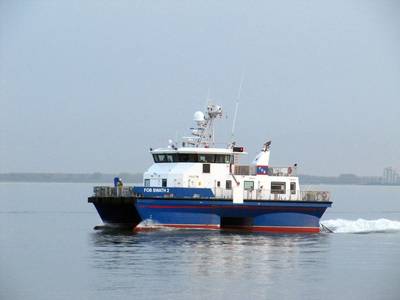 While HamiltonJet has already supported more than 80 offshore wind farm vessels globally, the company's CEO, Ben Reed, says, "It's the first time these two products have been paired together, and the first time we've put waterjets of this size into a wind farm vessel. It means these boats will really power along."

For the Offshore Windservice AS project, HamiltonJet devised a creative solution to retrofit waterjet technology into the existing fleet. “This clearly shows you don't have to buy a new boat when a refit meets the brief," Reed says.

With one vessel complete and the second underway, Offshore Windservice AS is progressing the refit at pace.

"We actually ended up installing the waterjets on the first vessel ourselves, and it couldn't have been easier," says Billy Thøger Kristensen, Chief Operating Officer at Offshore Windservice AS.

"The speed has significantly increased on what was predicted, while the new set-up has far less vibration and noise than before. It's resulted in a much more comfortable ride for the crew and turbine engineers. That's important in a vessel regularly working out at sea for a week at a time," Kristensen says.

The operator is also impressed with HamiltonJet's AVX control system. "With AVX we're able to access HamiltonJet's JETanchor system, the best hands-free technology on the market. It's two operational modes of Station Keeping and Virtual Anchor greatly simplify the job of our skippers in open water," Kristensen says. "It's a life-changing tool for our skippers and crews."