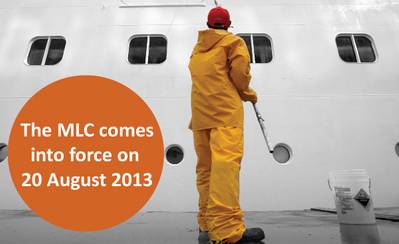 As the Maritime Labor Convention 2006 (MLC) comes into the force the ITF (International Transport Workers’ Federation) has promised to dedicate all its resources to helping it make real changes to the lives of all seafarers. The ITF recognizes the MLC as the first ever true bill of rights for those working at sea, and its president today described its going live as “a significant leap forward.”

The ITF has worked alongside shipping organizations, the ILO and governments for over a decade to jointly create and shape the MLC, and is committed to monitoring and assisting its implementation and persuading many more countries to ratify it.

ITF president Paddy Crumlin stated, “The MLC represents a significant leap forward in the global trade union campaign to improve the labor rights and labor standards of seafarers. It is a true watershed in international shipping, which adds the pillar of workers’ rights to existing standards of safety, security and crew standards.”

He continued, “For nations in the Asia Pacific region, which supplies the majority of the world’s seafarers and where the bulk of global sea trade is concentrated, the MLC will underpin new seafarer employment opportunities and is a key plank in the global shipping regulatory framework designed to secure the future of a high quality and competitive shipping industry.”

ITF acting general secretary Stephen Cotton added, ‘We now have a bill of rights for seafarers – including those on international cruise ships – that sets out the right to a safe and secure workplace; fair terms of employment; decent living and working conditions; access to medical care, health protection and welfare and to freedom of association.”

He continued, “It has been a hard-won victory to reach this moment. Now the same coalition of the ILO, unions, maritime organizations and governments have to continue to jointly build on and support the convention, and make sure that as many countries as possible ratify this landmark piece of legislation.”