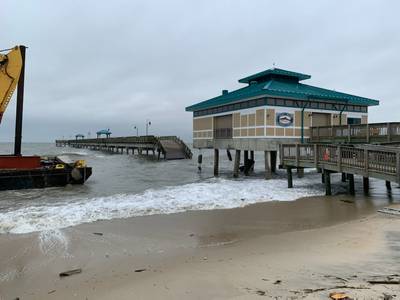 The damaged James T. Wilson fishing pier with debris on the deck of the barge is depicted in this photo taken Nov. 17, 2019. (Photo Credit: U.S. Coast Guard)

A failed weld ultimately led to a barge breaking loose from its mooring and heavily damaging a pier, the National Transportation Safety Board (NTSB) said Thursday.

Investigators determined a weld on a shackle that connected a construction barge to a mooring chain failed, allowing the deck barge YD71 to break free from its mooring in stormy weather and drift about two miles to the south before it contacted and damaged an entertainment pier and grounded on a beach just north of a fishing pier in Hampton, Va., on November 17, 2019.

Emergency responders were notified but were unable to stop the barge’s continued movement down the beach where it ultimately contacted the James T. Wilson fishing pier. The contact, which caused two of the pier’s 40-foot concrete spans to collapse, resulted in more than $1.2 million of damage to the pier and about $38,000 in damage to the a 100-foot-long, 45-foot-wide barge owned by Coastal Design & Construction Inc.

There were no injuries as no one was aboard the barge or on the pier when the accident occurred. 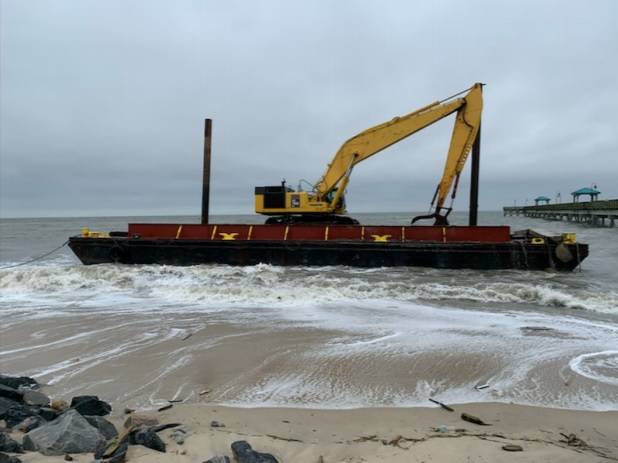 The YD71 aground after breaking free from its mooring and prior to striking the pier. (Source: U.S.Coast Guard)