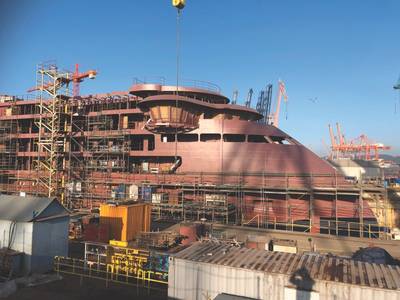 The new expedition cruise ship features a range of state-of-the-art technologies that will help it to navigate safely through some of the world's most remote locations, including several planned cruises through Arctic and Antarctic waters.

Wesmar’s EV860 sonar was chosen for the vessel for a variety of reasons, including its dual, forward-looking sonar and bottom profiler, the manufacturer said.

“Wesmar has a very good product,” said Captain Leif Skog, Vice President Nautical, at Lindblad Expeditions. “We value the bottom profiling of the ocean’s bottom, confirming depth figures in the charts. We operate in remote areas where the chart information is uncertain.”

And, with an increase in overall security concerns worldwide, the sonar’s 360-degree field-of-view allows for visual monitoring all around the vessel, 24 hours a day, Wesmar noted.

The sonar deploys from near the bottom of the ship, forward, emerging from an enclosure called the seachest; when not in use, the 220-volt sonar is retracted back into the vessel by Wesmar’s M-18 hoist. A small self-contained hydraulic unit powers the hoist.

“Lindblad has a very strong name in the cruise ship industry, and is a leader in the expedition cruise category, so we are honored by this repeat business,” noted Roger Fellows, President and Owner of Western Marine Electronics (Wesmar). “The meteoric rise of the cruise ship industry has clearly caught our attention, and we look forward to having another Lindblad vessel with Wesmar aboard.”

Vessel construction is well underway, and Wesmar’s sonar is slated to be installed in April 2019. National Geographic Endurance is scheduled for delivery in January 2020.