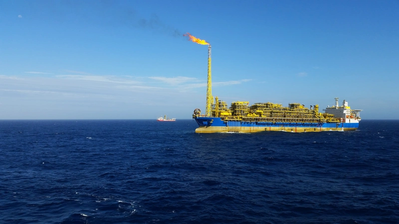 As we enter the final month of 2022, a review of the floating production system (FPS) market revealed that some E&Ps have been bold with investments in the development of their oil and gas (O&G) reserves, with a total of 1.9 mmboepd (1.3 mmbpd of oil and 3.8 bcfd of gas) of FPS throughput capacity sanctioned year to date (YTD).

This represents a 7% increase on 2021, with Westwood anticipating an additional 180 kboepd of FPS throughput capacity to be sanctioned before the end of the year.

A total of 13 FPS units have been sanctioned YTD, with an estimated engineering, procurement, and construction (EPC) value of $15 billion, a 9% increase year-on-year.

Although there has been an increase in total FPS EPC contract award value and throughput capacity sanctioned this year compared to 2021, the inflationary cost environment and global supply chain uncertainties have resulted in some E&Ps opting to delay EPC contract awards for major FPS projects previously planned for 2022.

At the start of 2022, Westwood anticipated 25 FPS units, with an EPC value of $19 billion to be sanctioned this year. 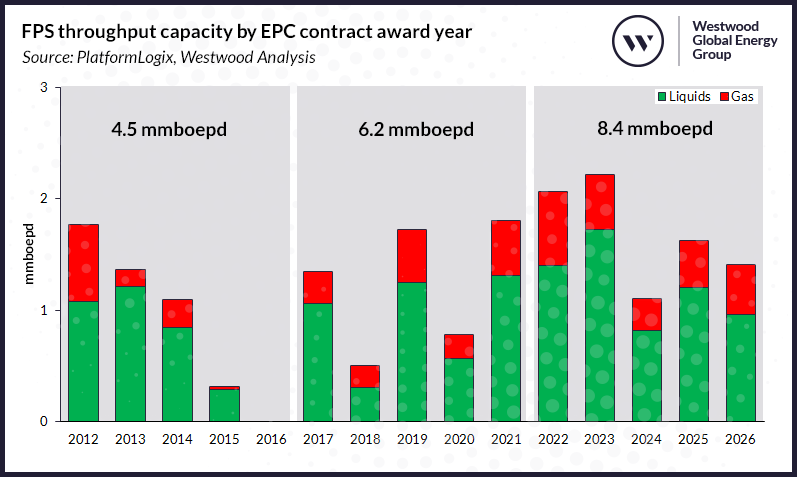 It is pertinent to state that the EPC contract value for Petrobras’ P-80, P-82, and P-83 were higher than initially forecasted, hence, reducing the impact of delayed projects on the 2022 EPC value.

Westwood anticipates an upgrade to Cenovus Energy’s Sea Rose FPSO unit, and an EPC contract for CNOOC’s Deepwater 2 FPSS could still be sanctioned before the end of 2022.

Despite major project delays, 2022 will have the highest FPS throughput capacity sanctioned since 2010.

This is expected to be driven predominantly by activities in Latin America and West Africa.

In Guyana, Modec recently signed the front-end engineering and design (FEED) contract for the fifth Stabroek FPSO unit to be deployed on ExxonMobil’s Uaru.

However, the EPCI contract award anticipated in 2023 is subject to governmental approvals of the field development plan and a final investment decision by Exxon.

Woodside expects bid submission for the Trion unit in 1Q 2023 after the operator delayed FID from 2022, citing the need to optimize the development and execution plan, cost, and development schedule. Supply chain inflationary pressure remains a concern.

Over the past five years, cost deflation, simplification, and standardization have seen the EPC cost of FPSO units fall dramatically, averaging $7,950/boepd of throughput capacity.

However, an increase in the volume of active EPC tenders and an uptick in industry cost has resulted in average 2022 EPC costs of $9,310/boepd.

Considering five-year contracting periods between 2012 and 2026, forecast FPS throughput capacity to be sanctioned over the 2022-2026 period represents a 36% increase compared to the preceding five-year period and an 87% growth on the 2012-2016 period.

Uptime International has secured two contracts with Cochin Shipyard in India, for the supply of logistics systems to be included…