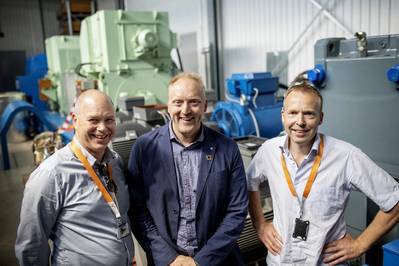 While there is no consensus on the marine industry ‘fuel of the future’ that will meet ever tightening international emission mandates, a group of organizations has commenced what it is calling the world’s first long-term, full-scale, testing of ammonia as a fuel in a marine four-stroke combustion engine. Wärtsilä, Knutsen OAS Shipping AS, and Repsol, and the Sustainable Energy Catapult Center, have teamed for the effort, as ammonia offers promise as a carbon-free fuel for marine applications, to meet the IMO’s mandate of cutting emissions from shipping by at least 50 percent by 2050.

“This DEMO 2000 project is another steppingstone for reaching our ambitious climate targets and it is also aligned with our recently published hydrogen strategy,” said Tina Bru, Norwegian Minister of Petroleum and Energy. “We need to develop and use new technologies that reduce emissions. We are very happy to support development work that can lead to increased use of ammonia as a fuel in shipping and in the offshore sector.”

Development work by Wärtsilä, as it prepares for the use of ammonia as a fuel, continues with this testing program, which is touted as the world`s first full-scale four-stroke combustion engine test. The project will commence in the Sustainable Energy Catapult Center’s testing facilities at Stord, Norway during the first quarter of 2021.

"Ammonia storage and supply systems will be designed and developed for maximum personal safety, and in parallel with the Fuel Gas Handling System under development as part of the EU project ShipFC,” said Egil Hystad, General Manager, Market Innovation at Wärtsilä Marine Business. “This project is coordinated by NCE Maritime CleanTech, and it involves an ammonia driven fuel cell which will be tested on the Eidesvik Offshore supply vessel, Viking Energy.”

Wärtsilä, as part of its development work on future fuels, has studied the use of ammonia as a future carbon-free fuel through the ZEEDS initiative. The company’s first ammonia combustions tests were commenced in Vaasa, Finland, in winter 2020, and will continue with this long-term testing at the Sustainable Energy Catapult Center facilities in Stord.

“A future implementation of ammonia as a carbon free fuel, combined with clean energy production from offshore wind or other renewable energy sources can be the start of a new industrial era for the Norwegian industry,” Hystad said.

This engine test was made possible by a $2 million grant from the Norwegian Research Council through the DEMO 2000 program.