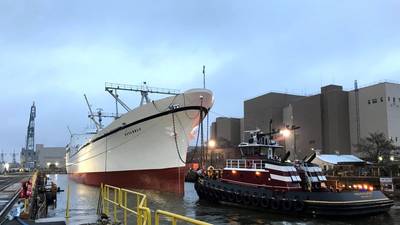 The world’s first nuclear-powered ship is making its way back to Baltimore flowing a repair stay in Philadelphia.

On Thursday, the N.S. Savannah began its journey back from drydocking in preparation for decommissioning.

Having spent the last few months at Northeast Ship Repair undergoing general inspection, repairs and structural modifications, the ship will be back at home at the Canton Marine Terminal by Friday.

While the last nuclear fuel was removed from the ship more nearly 50 years ago, there are still components of the nuclear power plant that need to be removed to support its decommissioning. A contract for decommissioning the vessel’s nuclear power plant is expected to be announced later this year, according to the U.S. Maritime Administration (MARAD), who holds a license issued by the U.S. Nuclear Regulatory Commission (NRC) to possess and dismantle a non-operational nuclear reactor and power plant aboard the vessel.

The only U.S.-built nuclear-powered merchant ship, and one of only four nuclear-powered cargo ships ever built, the Savannah was constructed in the 1950s as a part of President Eisenhower’s Atoms for Peace program. The vessel is now a registered National Historic Landmark.

Once decommissioned, MARAD will determine the future of the vessel.