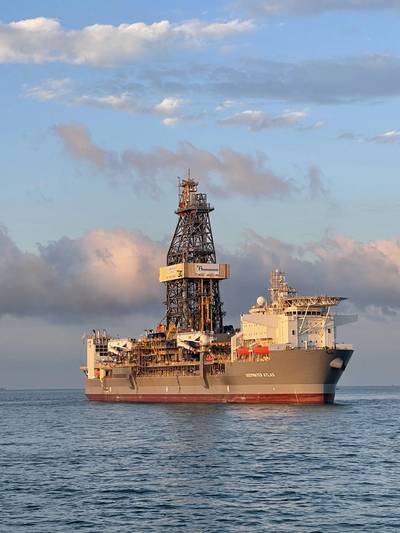 Deepwater Atlas, the world's first 8th generation drillship, was recently named at a ceremony in Singapore.

The news of the naming ceremony, held late in April, was shared by Transocean, a drilling contractor that owns the vessel, via social media this week.

The Deepwater Atlas and its sister rig Deepwater Titan will be the first two 8th generation units when they enter service, and, according to Transocean, will be characterized not only by their ability to drill and complete 20,000 pounds per square inch (psi) prospects, but also by their industry-leading net three-million-pound hoisting capacity.

Keelan Adamson, President & COO of Transocean, said in a video shared on social media that the rigs are so well equipped that they can reduce the time it will take to drill a deepwater well, creating an opportunity to drive the total well cost down.

Last year, the Deepwater Atlas secured a contract with Beacon Offshore Energy for drilling at the Shenandoah project in the U.S. Gulf of Mexico.

Built in Singapore by Sembcorp Marine, the drillship, which will be able to drill in water depths of up to 12,000 feet, and with a maximum drilling depth of 40,000 feet, is expected to be delivered during the second quarter, and to start drilling for Beacon in the late fourth quarter of 2022.

The rig is expected to start operations under its drilling contract, using a 15,000 blowout preventer. Before the start of the second phase, the Deepwater Atlas rig will undergo installation of a 20,000 pounds psi, which is expected to be commissioned in the year ending December 31, 2023.

The Deepwater Titan, which has a five-year contract with Chevron at its Anchor project in the Gulf of Mexico, is scheduled to start drilling in the first quarter of 2023.

Watch the video below to learn more about the Deepwater Atlas capabilities, discussed by Transocean executives.