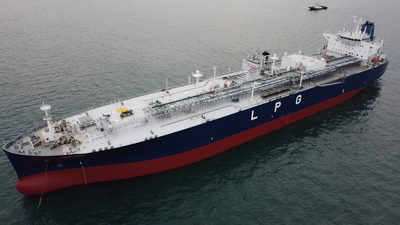 Finnish tech company Wärtsilä said it has won a contract to equip six new 93,000 cubic meter capacity liquid petroleum gas (LPG) carriers being built at the Jiangnan Shipyard in China for Singapore-based Petredec. The order with Wärtsilä was placed in March 2021.

The newbuilds, to be among the largest of their type ever built, will be fitted with Wärtsilä’s cargo handling system and LPG fuel supply system (LFSS). The onboard Wärtsilä solutions will be supported with the company’s digital Operational Performance Improvement and Monitoring (OPERIM) system to provide real-time data that will allow optimal operational efficiency at all times, the company said.

Wärtsilä noted it is currently the only company with LFSSs in operation, and has also a significant number of these units on order.

Lin Qinshan, vice president and commercial director of Jiangnan Shipyard, said, “This new 93K very large gas carrier (VLGC) is the fourth generation of VLGC developed by Jiangnan. Its advanced and optimal technology and system, its comprehensive economic and technical performance are in the leading level of the industry.”