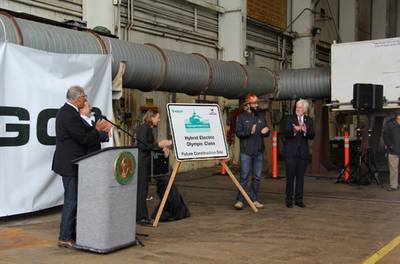 Earlier this year, Washington’s legislature authorized a contract extension for Vigor to build up to five 144-car Olympic-Class hybrid-electric ferries for WSF, which operates the largest ferry system in the US. ‘Greening’ its fleet has been a major objective for WSF and is intended to contribute to Washington State’s broad goal under Governor Inslee’s leadership to accelerate its move to a clean energy future.

Vigor has built the last 12 ferries in the WSF fleet and has been actively engaged in the development of hybrid-electric solutions. As part of its research, in June 2018 company representatives joined a delegation of maritime leaders on a Washington Maritime Blue visit to Norway to meet with experts on best practices and available technologies for low-carbon ferry operations. Another visit to Norway by Vigor and WSF as part of a second Washington Maritime Blue delegation is taking place this month (September 2019).

“Vigor has always deeply valued the opportunity to partner with Washington State Ferries in fabrication and repair,” said Vigor CEO, Frank Foti. “Now having the opportunity to build vessels that greatly reduce carbon emissions is a great honor, both in terms of the positive impact on the environment and for the hundreds of family wage jobs created by this work. We appreciate Governor Inslee’s leadership in this area and also the hard work the legislature undertook to make this happen.”

The Olympic-Class hull form is one of the most efficient in the fleet with less drag through the water and a small wake for a positive environmental impact and the new hybrid vessels will also have this hull form. They will be capable of 100 percent electric operation on most routes once the infrastructure needed for charging is installed. A 94 percent reduction in carbon emissions is expected over the lifetime of the vessels, along with the added benefit of significantly reduced operating costs for the ferry system.

The design and engineering phase for the conversion of the existing Olympic Class design to hybrid-electric is currently underway. Vigor expects to begin construction in late 2020, and delivery of the first ferry is expected to be in late 2022, while WSF’s Long Range Plan calls for all five ferries to be delivered by 2028, replacing the aging vessels in the fleet.