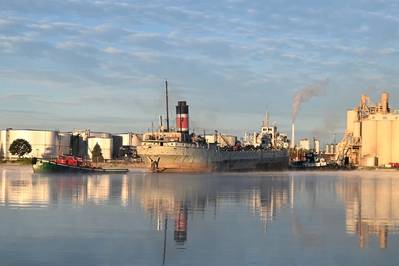 A nearly century-old vessel used as cement storage at the LaFargeHolcim terminal on the Fox River for the past 25 years is set to be scrapped.

On Friday at sunrise, the S.T. Crapo began its journey under tow from the Port of Green Bay to be scrapped at Port Colborne, Ontario, Canada.

Built in River Rouge, Mich., the S.T. Crapo was launched in 1927 as a self-unloading cement carrier operating on the Great Lakes, primarily carrying cement from Alpena, Mich.

By the mid-1990s, the vessel was the last coal-fired freighter on the Great Lakes, and in 1995, its boilers were converted to oil-firing by Bay Shipbuilding in Sturgeon Bay, Wis.

Since September 1997, the ship has been docked for cement storage at the LafargeHolcim terminal except for one trip to Alpena, Mich. in 2005 to carry a load of cement.

With LafargeHolcim expanding its on-land storage facilities, the S.T. Crapo was purchased by Marine Recycling Corp., which will recycle all of the metal from the ship.