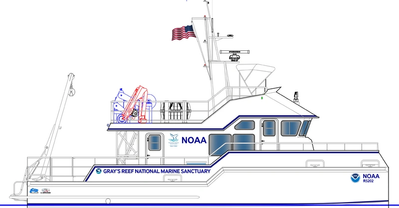 GRNMS is located 19 miles off Sapelo Island, Georgia, and is one of 14 marine sanctuaries and monuments that make up the U.S. National Marine Sanctuary System.

AAM will build the research vessel at its Bellingham Bay facility. The vessel is a 52’ x 19’ semi-displacement aluminum catamaran hull that was developed by Nic de Waal of Teknicraft Design in Auckland, New Zealand.

"The vessel is based on the proven design elements found in the recently commissioned and successful research vessel “Storm  Petrel” built for NOAA’s Olympic Coast National Marine Sanctuary," AAM said.

According to AAM, the vessel is being constructed to USCG (US Coast Guard) standards for service in waters where the range to refuge is 150 nautical miles or less and will operate as a multipurpose research vessel along East Coast Waters and Offshore on Ocean Routes for up to 16 passengers and 2 crew.

"The twin-engine speed and fuel-efficiency of this vessel will be fundamental to meet NOAA’s research goals and allow them to access and study this critical shoreline and marine area in the Southeastern US. The knowledge gained from science missions on this vessel will directly support the management and conservation of the marine sanctuary’s resources," AAM said.

The approximately 22 square mile sanctuary (about 14,000 acres) of Gray's Reef is just a small part of the U.S. territorial Atlantic Ocean, yet its value as a natural marine habitat is recognized nationally and internationally, AAM said.

“This larger vessel with greater range and deck space will transform scientific research and long-term monitoring capabilities at Gray’s Reef National Marine Sanctuary and across the South Atlantic Bight by providing an extremely capable, multi-mission platform for NOAA and our partners,” said Stan Rogers, Sanctuary Superintendent, “ This new vessel will help achieve NOAA’s mission including mapping, characterizing, and assessing the health of marine habitats in an ever changing environment.”

The design integrates a Teknicraft hull shape and is complemented by Teknicraft’s signature integration of a wave piercer that is positioned between the catamaran sponsons to break up wave action and ensure reduced drag while conducting research missions. For the operator, one of the most valuable features of this vessel is the excellent fuel economy, AAM says.

Powered by twin Cummins QSC8.3 engines with twin propellers, this custom vessel will serve as a valuable asset for NOAA’s specific mission off Coastal Georgia.

The vessel will host a variety of research missions and visiting scientists concentrating on seafloor mapping, habitat characterization, data collection, and the monitoring of the health of ocean species and marine wildlife.

Onboard the vessel there is approximately 250 square feet of working space on the aft deck, with a complete complement of working gear and a grid of deck sockets. The deck sockets are spaced every two feet and allow quipment and gear to be secured, moved, or removed from the working deck.

There is a fly bridge with bimini top covering on the upper deck, allowing vessel operations from a higher elevation while conducting research missions. The top deck also features an Interocean Conduction Wire Winch, Hauling Winch and a Morgan 300.4 crane. The main deck features an adjustable A-Frame for launching scientific equipment.

Additional features of the research vessel include both a wet laboratory for examining specimens and a dry laboratory for processing data. On board the vessel’s main deck are a fully equipped galley and comfortable dinette with settee/bunk, kitchenette, and wet head.

“All American Marine remains committed to being on the leading edge of manufacturing techniques and an innovator in merging the latest technology into a functional and proven vessel. We are delighted to have been chosen to build another vessel for NOAA, especially on the East Coast. This vessel will expand Gray’s Reef environmentally focused research activities and will aid them with their conservation efforts in the southeastern United States,” Ron Wille, All American Marine President & COO said.