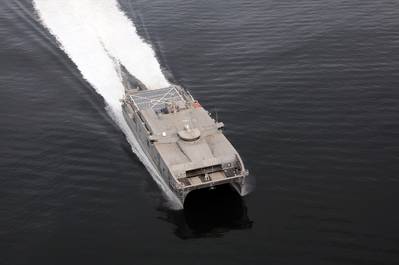 The USNS Trenton in action (photo courtesy of Austal)

Joint High Speed Vessel USNS Trenton (JHSV 5) successfully completed Acceptance Trials (AT) on March 13, 2015 in the Gulf of Mexico. Austal, the Trenton's shipbuilder, today announced the completion of the trials, which are the last significant milestone before delivery of the ship.

This milestone achievement involved the performance of intense comprehensive tests by the Navy, which demonstrated the operation of the ship’s major systems and equipment.

"We’re very pleased with how well Trenton performed, a true testament of the incredible skills of the JHSV Team, and the strong partnership of the industry/Navy team," said Craig Perciavalle, Austal USA’s President. "These trials proved USNS Trenton is ready to start her naval service and are a testament to the teamwork required to deliver a ship that is ready to enter the fleet.”

This vessel is the fifth of ten JHSVs that Austal has been contracted by the Navy to build at its Mobile, Ala. shipyard.  The Navy selected Austal for this $1.6 billion block buy contract in 2008. Austal teamed with General Dynamics Mission Systems to be the ship systems integrator, responsible for the design, integration and testing of the navigation, communications, and aviation systems.

The 103-meter JHSV provides the U.S. Department of Defense with a multi-use platform, capable of supporting rapid intra-theater deployment/transportation of personnel, equipment and supplies. The JHSV transports medium-size operational units with their vehicles, or can be reconfigured to provide troop transport for an infantry battalion, allowing units to transit long distances while maintaining unit integrity. The vessel also supports military logistics, sustainment and humanitarian relief operations at an average speed of 35 knots. With its CH-53 capable flight deck, the JHSV supports helicopter operations while the slewing vehicle ramp on the aft starboard quarter enables the use of austere piers and quay walls, common in developing countries. A shallow draft (under 4.6 meters) further enhances theater port access.

USNS Trenton (JHSV 5) will soon be followed by Brunswick (JHSV 6) which Austal will launch this Spring and deliver later this year. Fabrication is well underway on Carson City (JHSV 7) and the first aluminum was cut recently for Yuma (JHSV 8).

The captain of a U.S. aircraft carrier relieved of his command after seeking stronger measures in response to a coronavirus…