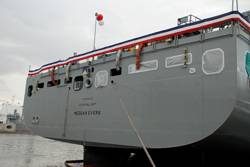 Military Sealift Command accepted delivery of its newest dry cargo/ammunition ship, USNS Medgar Evers (T-AKE 13), during a short ceremony at the General Dynamics NASSCO Ship Yard San Diego.
The ship, which was christened Nov. 12, 2011 in San Diego, honors slain civil rights leader Medgar Wiley Evers, who is remembered for his efforts to end segregation at the University of Mississippi in the 1950s and for his opposition to Jim Crow laws in the 1960s.  Since its launch, the ship has been undergoing a series of tests and trials in preparation for its delivery to MSC.
“As USNS Medgar Evers joins the MSC fleet of combat logistics ships today, the food, ordnance and fuel it will provide to the Navy’s combatant ships at sea are critical mission enablers for our globally deployed naval forces,” said Tim McCully, Military Sealift Command Pacific’s deputy commander. “From supporting an aircraft carrier’s 75-plus aircraft and 5,500 crew members, to transporting humanitarian assistance and disaster relief supplies, USNS Medgar Evers and more than 30 other MSC underway replenishment ships bring to life the motto: MSC delivers!”
The 689-foot long Evers, designated T-AKE 13, is the 13th of 14 new dry cargo/ammunition ships scheduled for delivery to the Navy by the end of this year. The first 11 dry cargo/ ammunition ships are currently operating as part of MSC’s Combat Logistics Force, delivering vital fuel, equipment and supplies to Navy warships at sea. The remaining 3 of the 14-ship T-AKE class are expected to be assigned to maritime prepositioning squadrons, which strategically place combat cargo at sea for rapid delivery to warfighters ashore.
Evers has a crew of 125 civil service mariners working for MSC and 11 Navy Sailors who provide operational support and supply coordination.
T-AKEs are the newest class of Combat Logistics Force ships being built for MSC.  They are replacing some of MSC's aging, single-mission supply ships such as Kilauea-class ammunition ships and Mars- and Sirius-class combat stores ships as they reach the end of their service lives.