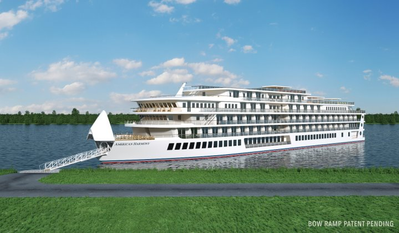 American Cruise Lines announced that its second of a new class of modern riverboat, the American Harmony, moved under its own power to the shipyard’s outfitting pier for final touches.

American Harmony was successfully launched at Chesapeake Shipbuilding this past November, 2018, and is well ahead of schedule for its August 17, 2019 inaugural cruise on the Mississippi River.

In addition to American Harmony, American Cruise Lines’ 3rd modern riverboat, American Jazz, is coming in 2020, as well as more new ships in 2021 and 2022.